The road layout of a “madcap” 300 home development on the edge of Exmouth is to be changed following a vote by East Devon District Council (EDDC).

The 16 affordable homes promised by the developers described as “scandalously low.” 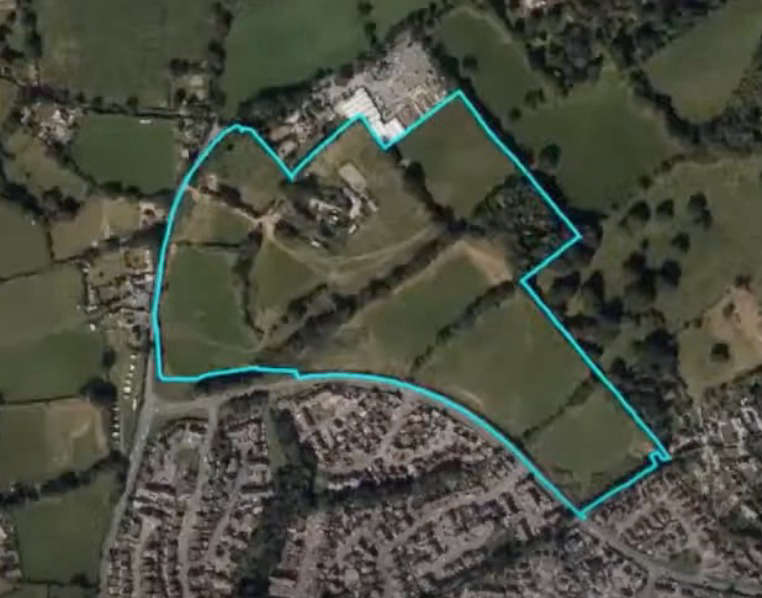 300 new homes, but councillors not happy.

The corner at Goodmores Farm housing development at Hulham Road will now have a simplified road layout.

Instead of the southwestern portion having two looping roads, it will now just have one, to reduce the risk of flooding through surface water runoff. As a result of the changes the number of homes planned has been reduced by one, to 298.

The principle of the development was granted planning permission in 2014 – a decision that has since tied the council’s hands.  As a result, despite concerns over the small number of affordable homes proposed by developers, full outline permission was given for plans in 2018.

Although nothing can be done to stop the project now, many councillors feel it is a major mistake in the making.

When first proposed, the development was meant to have 350 houses, a school, open green space, a communal commercial area, and employment land.  A viability assessment submitted by the developer argued that in order to provide some of these facilities it could only afford to make five per cent of the new buildings affordable – a far cry from the council’s normal 25 per cent requirement.

There are concerns too about future residents having to rely on cars, and its alleged poor public transport and cycle links.

In comments submitted before the latest planning meeting, Councillor Paul Millar (Labour, Exmouth Halsden) said: “I continue to object to this planning application along the same lines as Exmouth Town Council, and will do everything I can to delay and frustrate this intellectually incoherent and madcap scheme which ought never have been approved at outline”

Speaking at the planning committee, Cllr Paul Millar described the 16 affordable homes promised by the developers as “scandalously low.”

East Devon is facing an affordable housing crisis. A report by Devon Home Choice says more than 2,700 households in the district are in housing need.

Nevertheless, with outline approval granted by a previous EDDC administration, there is little that can be done to significantly alter the plans now.

Councillor Olly Davey (Green, Exmouth Town) welcomed the reduction in the amount of tarmac that will be laid as a result of the road changes. However, he reiterated arguments made previously about the plans, saying: “This is a twentieth-century development and not really fit for the twenty-first century.”