It’s going to take more than a yew tree branch to ward off evil at EDDC new HQ! 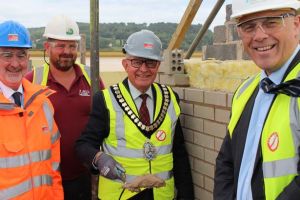 And who at EDDC was responsible for this press release that gives the (totally erroneous) impression that the sale of Knowle is 100% financing the new HQ?

“A yew tree branch has been placed on top of East Devon District Council’s new HQ to “ward off evil spirits”.

The topping out ceremony took place at Blackdown House in Honiton, which will be the council’s new home by January 2019.

As part of the ceremony, a yew tree branch was attached to the highest point of the building.

The ceremony was completed by council chairman Andrew Moulding and leader Ian Thomas. A council spokesman said it was “an age-old tradition”.

The authority plans to move from its current HQ in Sidmouth to Blackdown House in December 2018. The move will be financed by selling the property to Pegasus Life Ltd for £7.5m, which will turn it into a 113-apartment assisted-living community. …”

2 thoughts on “It’s going to take more than a yew tree branch to ward off evil at EDDC new HQ!”