Properties and low lying areas around Ashclyst Farm, Burrow Bridge, there is likely to be deep road flooding in the Burrow area, Broadclyst Bridge, Clyston Mill, Dymond’s Farm, Sowton Barton and properties and farms between Clyst St. Mary and Topsham including Newcourt Barton and Cotts Farm will start to flood first.

Flood waters may be deep and fast flowing in these areas. Residents are strongly urged to take action now. Remain safe and be aware of your local surroundings.

“Thousands of homes to be built in flood zones”

And no-one is stopping it:

That doesn’t seem to matter to our TiggerTory councillors who prefer to keep their tight personal hold over their planners and their cordial relationship with developers rather than thinking about the benefits of a Jurassic Nationsl Park on residents and visitors. Curious that.

“You can’t put a price on nature. You can’t quantify the uplifting effects of a walk in the Peak District or the way your soul soars at the sight of a stormy Cornish cliff.

Except, it turns out you can: it’s worth almost £5 trillion a year. Economists have calculated the mental health benefits of the world’s national parks, and concluded that on this measure alone they provide services amounting to a significant proportion of global GDP. And that is before you consider all the other environmental services they offer.

From the smooth cliffs of Yosemite to the jagged glaciers of Chamonix to the wild fenland of East Anglia, protected spaces improve our mood, reduce our work absences and keep us well. By quantifying the magnitude of this effect in Australia then using the tools of health economics to place a monetary value on it, researchers were able to extrapolate what they called a “conservative” global estimate of £4.67 trillion.

As unromantic as it sounds, economists believe that until nature has a value on a balance sheet it can be depleted and exploited without penalty. In recent years researchers have looked to calculate the value of the natural world in, for instance, flood protection, pollination and climate control.

The analysis, published in the journal Nature Communications, extended this further to consider mental health. The researchers looked at the improvement in wellbeing in 20,000 Australians that was attributable to visiting national parks, then translated this into quality adjusted life years, which is a measure of how easily people can live their lives. Finally, they extended the calculation to the world.

Dieter Helm, a University of Oxford economist who was appointed by the government to value Britain’s “natural capital”, has said in the past that figures such as these are by necessity imprecise, but not considering them in natural accounts is “precisely wrong”. He welcomed the new research.

“This is another bit in the mounting pile of evidence highlighting the huge health benefits, both mental and physical, from nature,” he said. There are great economic gains from investing in natural capital . . . It should be a major priority for the Treasury. It is not just concrete infrastructure that matters: green infrastructure has some of the highest returns.”

The ultra-fine particles (UFPs) are produced by fuel burning, particularly in diesel vehicles, and higher exposures significantly increase people’s chances of getting the deadly cancer. Previous work has shown that nanoparticles can get into the brain and that they can carry carcinogenic chemicals. …”

This correspondent had a beautiful sunny autumn drive through the villages of West Hill and Woodbury yesterday morning. Then the enthusiasm of conservative Cllr Philip Skinner for a “network of linked villages being built in the North West Quadrant area of East Devon” came to mind.

Has not East Devon sacrificed enough Grade 1 agricultural land to build Cranbrook? Were we not told that this sacrifice would be EDDC’s contribution to housing need?

Then we found that Ottery St. Mary was sacrificed.

Exmouth was sacrificed. I could go on.

And now we are told the villages of Poltimore, Huxham, Clyst St Mary, Clyst St George, Ebford, West Hill, Woodbury​, Woodbury Salterton, Exton and Farringdon would be most likely to be sacrificed.

Has the ward councillors of the above villages consulted their constituents? Are the constituents of Ben Ingham and Geoff Jung happy that Woodbury will join Cllr. Skinner’s “bigger vision”?

Why aren’t our independent councillors telling Exeter that East Devon has done their bit, they do not wish urban sprawl and it is now the other surrounding councils turn?

A development proposal adjacent to Woodbury Common for 14 “holiday lodges” could be built on a section of the golf course created by the owners of Greendale Business Park.

The Hotel and Golf course was sold some years ago to Nigel Mansell and two years ago, sold again to a c company known as the “Club Company” which operates 13 Country Clubs in the UK, who are owned by a London Based private equity group “Epiris”

The planning application documents outlines how falling numbers of golfers across England is forcing clubs to diversify and that it is necessary to attract golfing markets, such as golf breaks, through ventures like the proposed holiday accommodation. 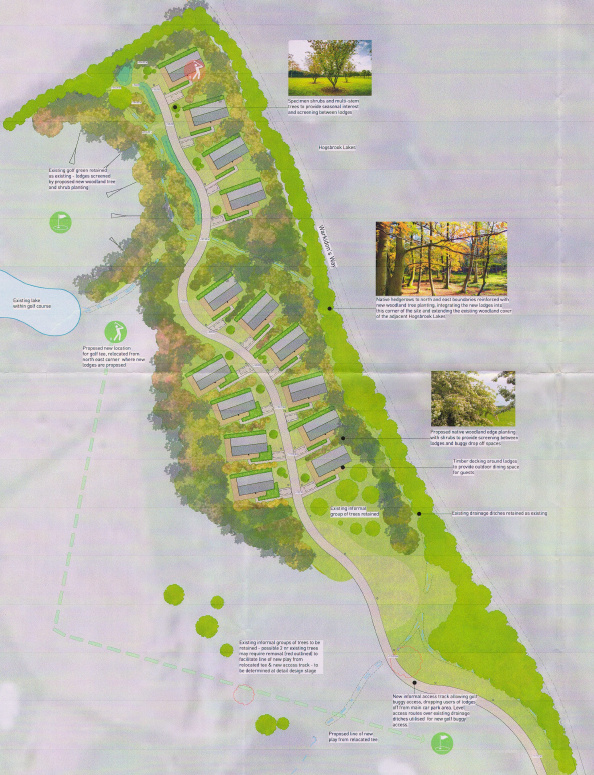 It also says that with the golfing sector under pressure with declining membership and participation forcing many clubs out of business, they must look at new ways to attract golf societies and other groups looking for golfing holidays.

One way to do this is through investing in new accommodation and the lodges would add to the existing hotel on the site.

The statement explains how the number of registered golfers has dropped eight per cent in the last four years. Adults playing golf has fallen 27 per cent between 2007 and 2016, and juniors playing golf weekly have dropped five per cent since 2014.
It adds:

“In clubs where membership is growing, clubs have taken positive steps to address the issues and are catering for a range of different needs and are developing facilities to broaden income streams and become part of the community.”

“Given the declining popularity of playing golf in England and in order to maintain the business, it is necessary to attract golfing markets, such as golf breaks, through the proposed holiday accommodation. This will allow the club to attract more golfers and more visitors to the bars, restaurant, health club and spa, to generate a vital additional income stream.”

However, the location chosen to build these lodges is next to a very important historic and environmentally important ancient “Green lane” known as Walkidons Way. 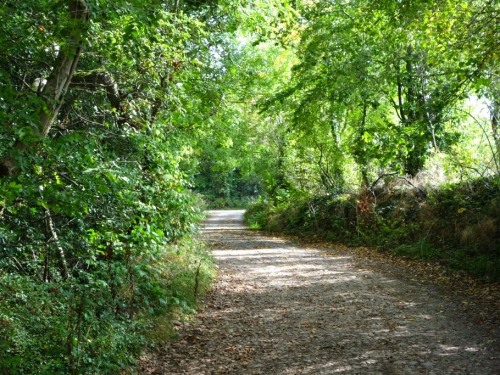 “Walkidons Way is a rare example in our locality of a green lane – most of the rest having been tarmaced. It is a public access route and runs between Hogsbrook Farm at its north-western end and Woodbury Common at Woodbury Park to the south-east. Along the way it passes beside Rockham Wood – a (private) ancient wood that is a designated County Wildlife Site.

A green lane can be defined as an un-metalled track with field boundaries on either side. These boundaries may be banks, hedges or woodland edges, often with features such as ditches – all of which can be seen along the length of Walkidons Way. The hedges and woodland edges here are particularly rich in examples of hedge-laying and coppicing of great age, and possibly also an ancient boundary trees.

In terms of bio-diversity, green lanes are mini-landscapes with their own micro-climate and ecology, due to the combination of the track and its boundary features. They may be more botanically species-rich than a single hedge, act as wildlife corridors, and their sheltered conditions are of great importance, for example, to butterfly populations.
Historically, Walkidons Way linked Greendale Barton – formerly an important farm on the site of the present Greendale Business Park – to the Common. This route adopted from at least Saxon times, as a drover road, for moving stock between Greendale and the Common.

The former agricultural land here has been much altered for leisure use, and the lane now passes between golf courses at the higher end, and fishing lakes lower down, which were both created during the 1990s. The Woodbury Park complex, which opened in 1995, was a highly controversial development at the time, but has become a generally accepted element of the modern landscape.

The track and its verges are unfortunately suffering degradation from modern vehicular traffic, but Walkidons Way offers a beautiful walk of very different character to that of most of our local lanes, to the open spaces of the Common.”
It will be interesting to see if the need of “big business” will win over the concern to preserve an ancient way.

“Plan for fracking ‘years behind schedule’ and has cost taxpayer £32m”

Imagine what we could have done with £32m!

“The UK is planning to invest in Argentina’s controversial oil shale industry using a £1bn export finance deal intended to support green energy, according to government documents seen by the Guardian.

Instead official records, released through a freedom of information request, have revealed the government’s plan to prioritise support for major oil companies, including Shell and BP, which are fracking in Argentina’s vast Vaca Muerta shale heartlands.

One government memo, uncovered by Friends of the Earth, said that while Argentina’s clean energy sector was growing, it was “Argentina’s huge shale resources that offer the greatest potential” for the UK. …”

EDDC response to Jurassic National Park: sit back and do nothing

“Resolve to await the Governments response to the recommendations; and note that the Chilterns, the Cotswolds and the Dorset and East Devon AONBs are potential candidates for future designation as National Parks.”

Neil Parish scored 17%: was present for 12 votes and voted positively in 2

Hugo Swire scored 25%: Swire was present for 12 votes and voted positively in 3

MORAL OF THIS TALE: If you believe in climate change and want to see something done about it, don’t vote Tory, be wary of Lib Dems and vote Labour or Green (or Independent in East Devon)!

“Conservative MPs are almost five times more likely to vote against climate action than legislators from other parties, a Guardian analysis of 16 indicative parliamentary divisions over the past decade has revealed.

The Tories also registered many more donations, shares, salaries, gifts and tickets to sporting events from fossil fuel companies, petrostates, aviation companies and climate sceptics, according to declarations made in the parliamentary record of MPs’ interests between 2008 and 2019.

The Guardian, in collaboration with the investigative environmental journalism group DeSmog UK, rated MPs from 0% to 100% based on 16 parliamentary votes since 2008. The selection sought to cover a range of measures that would affect the UK’s carbon emissions, with an emphasis on votes where MPs were willing to break ranks and put the climate before their party.

The analysis shows that although most politicians publicly express support for ambitious long-term climate targets, when it comes to short-term measures to reduce the UK’s carbon footprint, those in power are less likely to make this a priority.

The scores are not intended to be a definitive evaluation of an MP’s green credentials – both the Conservatives and Liberal Democrat parties complained they had been hard done by.

But experts said the scores were an important tool for voters to make a choice through a climate prism with a potential general election looming. …”