Dying for a profit

“Burial and cremation fees have soared by up to 124 per cent in four years – forcing some ­families into debt, research shows.

But the most expensive place to be laid to rest is Wandsworth, South London, which charges £4,861 per plot.

The figures were revealed by insurance giant Royal London, which says town halls are ramping up prices to make up for government budget cuts. …” 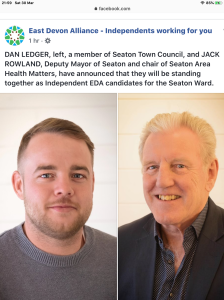 “It can be safely assumed that Dominic Raab does not have a library in his house.

Or if he does, perhaps the lighting wasn’t sufficient for a live interview on the BBC on Friday.

But how does a Tory MP convey his well-read and knowledgable depths without a library? With a hastily cobbled together pile of books on a window sill of course.

But nine books does not a library make, and more than a few people, including Labour’s Jess Phillips, [and many more!] chipped in with their own analysis of the window dressing. ….”

Councillors discovering a new sense of purpose – just before elections …

Elections are funny things. Just before them some councillors seem to find a new sense of purpose …

Take Seaton, where disgraced ex-Mayor Peter Burrows (who has refused to resign as a town and district councillor despite a unanimous vote at town level for him to do so and where the district Monitoring Officer has admonished him) has recently developed a burning interest in beach cleaning and has organised two within a few weeks of each other, with lots of publicity for them.

Seaton will surely have one of the cleanest beaches in East Devon before 2 May!

BUT the Plastic Free Seaton Facebook page (admin Peter Burrows) is a CLOSED group so you have to ask his permission to contribute. Mr Burrows sure does like to control his websites!

Seaton’s rogue councillor is at it again on Facebook. I’m reporting him to the Liberal Democrats, because this self-appointed Town Censor certainly isn’t a liberal. Paddy Ashdown must be turning in his grave.

If you have further stories of new councillor interests, feel free to share them.

Want to know where you vote on 2 May? Tough, EDDC won’t tell you

The website where you put in your postcode and it tells you which ward you are in and which polling station you go to isn’t working.

‘Why not spend a little more?’

“There’s always one. There you are, with your grand plan for making everything better, and everyone thinks it’s great. Why not, everyone is beginning to think; why can’t we fix climate change and close the gap between rich and poor and give everyone a decent economy and a non-ruined planet to live on?

And then from the back of the room, up pops the hand. And you sigh because you know what the owner of that hand is going to say: all very well and good, its owner tuts, and this sounds lovely, but how are we going to pay for it?

Before answering that question, it would be remiss not to point out that the guy in charge of President Kennedy’s budget didn’t think the country could afford to put a man on the moon, and the UK Treasury didn’t want to build the Victoria Line (or set up a Green Investment Bank, as just one more contemporary example). Some people don’t want to pay for things, which is a very different thing from asking how we should pay for it. With the momentum building around a Green New Deal, it’s really important not to let this great idea be derailed by those who mean ​‘I do not like this thing’ but who say ​‘this thing is too expensive’.

Oh, and obviously we should pay for it. We are talking about the actual viability of human life on Earth.

But the good news is that the money is there, or could be. Much of it is being lavished on things we can’t really do any more, like prospecting for yet more fossil fuels, so we need to spend it on other stuff instead. We don’t yet properly make the polluter pay for the impacts that all of us end up paying for in flood defences or costs to the NHS from air pollution or heatwaves. And if we’ve learned one thing from the misadventures of the last twenty years, it’s that we can blinkin’ well pay for things on a massive scale, provided we actually want to.

Ending the fossil fuel age in short order will require lots of money. But that’s OK, because there’s an awful lot of money around: global annual spend on all infrastructure is around $2.5 trillion, a lot of which is actively helping to speed us towards climate breakdown. So before we even need to start thinking about ​‘new’ money, it has to be the job of financial regulators, the Treasury, and the Bank of England to ensure existing money flows out of the destabilising brown economy and into the green economy.

“It’s hard to think of a better candidate for increasing public borrowing than re-kitting the economy to be modern, sustainable, healthy, and prosperous.”

One way to do this it to change the way existing banks lend, or supersede them entirely by creating new ones. On the first of these, the Bank is slowly but surely recognising that climate breakdown is bad for the economy, but isn’t yet walking the talk on making sure its own lending doesn’t prop up fossil fuels — a precursor to a welter of other changes to the financial rules, such as introducing higher capital requirements (i.e., defining as ​‘more risky’) investments in high-carbon assets.

To get this all to happen faster the Treasury may need to get more directive regarding the Bank’s mandate, or at the very least expand its brief on financial risk to include risks from environmental change. Which itself means the Treasury will need to see environmental action as an absolute imperative.

NEF has also long advocated for the Royal Bank of Scotland to be broken up into a network of local investment banks, tasked specifically with delivering the funds that are needed by the specifics of the region, people and assets that they serve — and such banks could also have a green mandate written into their investment missions as well.

Financial regulators like the Treasury and the Bank of England need to expand their mandate to recognise environmental action. Image: 10:10 (CC BY-NC-ND 2.0).

One of the most eye catching elements of Alexandria Ocasio-Cortez’s crowd-sourced Green New Deal manifesto is its focus on fairer taxes. We need these anyway — for example, the poorest 20% of families in the UK pay a higher proportion of their income in tax than anyone else. A higher price on carbon, in some form, is likely to be a central part of any plan to rapidly get our economy off fossil fuels, not least to act as a further disincentive to high-carbon investment. But this or any other putative ​‘green’ tax must be fair, and must be seen to be fair.

This is because a climate mission must be a national mission. In a democracy, social licence for rapid change is not a luxury, it’s essential. History, most recently the Gilets Jaunes protests in France, is riddled with examples of ostensibly ​‘green’ taxes butting up hard against the court of public and tabloid attention, sometimes with good reason.

So care will need to be taken to consciously generate new sources of income in a way that helps actively correct the unfairness of our tax system. NEF’s proposed frequent flyer levy — which would replace Air Passenger Duty with a tax rate that increases the more you fly – is one such way to do that. And any new money raised must be specifically earmarked – ​‘hypothecated’, in wonkish parlance – for visible, socially progressive investments in the parts of the climate transition that make everyone’s daily lives better, particularly the less-well-off: world-class, reliable and ultra-affordable public transport, like buses; insulation for homes; vast tree planting schemes; and programmes to create new, lasting work in sustainable industries around the country.

Green taxes need to both be fair, and be seen to be fair. The Gilets Jaunes protests in France are an example of what can happen when this isn’t the case.

When governments decide they want to spend big, then they spend big. Propping up the banking sector cost an extraordinary £1 trillion, all in, including the unprecedented creation of money by central banks. When there’s a war to be fought, the money can be found. Austerity notwithstanding, we spend huge if insufficient sums on healthcare, social care and education, because we rightly see them as important and worth spending money on.

“The question is not how we can pay for a state-led programme of green investment – but whether we want to.”

Austerity, however, does withstand. This has been a decade driven by an obsession with controlling the size of state spending. It has hollowed out the ability of the state to properly lead a green transition. So-called ​‘fiscal rules’ – government targets for debt and borrowing – are cited as if they are the laws of physics. They need to change. Just as it is would be unjust to allow future generations to suffer the consequences of today’s unsustainable economy, so too is it unfair that today’s taxpayers are asked to shoulder 100% of the costs. It is also hard to think of a better candidate for increasing public borrowing than the re-kitting of the economy to be modern, sustainable, healthy, and prosperous, via a huge state-led programme of green investment.

So look. The question is not how we can pay for it – there’s enough money, and precedent for just about all the things we’d need to do to marshal the cash – but whether we want to. Perhaps therefore we should pay less attention to Kennedy’s budget controller, baulking at the cost of sending a man to the Moon, and more to his then Vice President Lyndon Johnson: ​“would you rather have us be a second-rate nation, or should we spend a little more money?”

Fighting for proper local health care with whatever it takes.

Clyst St Mary ‘being swallowed by Exeter’ (and Cranbrook too)

“Villagers in Clyst St Mary watched in horror as yet another lorry overturned within feet of their back gardens this week – the second identical crash in recent months – and they say it is just one symptom of growing traffic problems.

DevonLive went to ask villagers about the overturning lorry problem – but it turns out that is just one of the many traffic issues they are dealing with. One villager whose house backs on to the roundabout says she remembers it happening four or five times before.

Over the years villagers have witnessed a huge increase in traffic. Now they feel they are in danger of ‘being swallowed by Exeter’ as yet more development is planned.

Clyst St Mary sits only about 200 yards from the busy M5. It also gets all the traffic heading to Westpoint, the Devon County Show-ground and the village is bisected by the A376 and A3052 to Exmouth and Sidmouth. …

… Ultimately they need to slow the traffic. It’s supposed to be 40mph – but they don’t slow down on the roundabout if there is nothing coming from the right.

“For us getting out of the village and driving on to that roundabout is a real issue. People in the village think there should be traffic lights so we can get out safely. At rush hour you take your life in your hands.”

And just in case you weren’t sure if Cranbrook is a suburb of Exeter, a local resident sent this to Owl, received through the door recently a survey of how active residents are, complete with Exeter City Council address and logo: 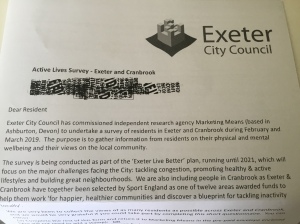 Perhaps Swire and Parish have a view on this?

Swire and Parish voted FOR the withdrawal agreement today