Crown Estates rented home? Beware – it could be sold from under you

“Scores of complaints have been made about rented properties on royal land and tenants have faced more than 100 evictions, a Guardian investigation has found, prompting anger over how the Queen’s £14bn property portfolio is managed.

The crown estate, which helps bankroll the Queen by giving the monarch 25% of its profits, has sought to evict 113 tenants in the past five years so they can sell their homes for profit.

It comes after it has emerged on Tuesday that the taxpayer has footed a £2.4m bill to renovate Frogmore Cottage, the Duke and Duchess of Sussex’s official residence, according to royal accounts. While the royals have no direct oversight role in crown estate’s dealings, Prince William and Prince Charles have both spoken before about the importance of ensuring good quality housing is available for all.

Figures obtained by the Guardian show that the crown estate has received more than 100 complaints about its residential properties in just two years, including grievances over rent hikes, leaks, delays in repairs and faulty electrical goods. …

An investigation using data obtained through Freedom of Information laws reveals that:

The crown estate has made £1.1bn selling off more than 700 residential and commercial properties since 2014, with one private firm subsequently hiking rent well above inflation.

More than a quarter of a million pounds has been banked by the crown estate in housing benefit from just seven hard-up tenants.

Four tenants have sued the crown estate for breach of contract, including one claim worth half a million pounds. …

Prince Charles has also spoken out in the past in favour of affordable housing for low-paid workers. In 2003, he said in a speech that “the lack of affordable rural housing is one of the most important issues facing the countryside”. …

The crown estate issued 113 “notices to quit” to residential tenants from 2014 to 2018, including 97 in rural properties, nine in Windsor and seven in central London.

Since 2014, £253,092 has been paid to the crown estate in housing benefit. The majority of the payments were for five tenants in Camden, north London. …”

Perhaps not his finest hour:

“From 12 April 2019, unpaid director of Fresh Voice and Vision Limited, which was set up to provide support to the leadership campaign of the Rt. Hon Dominic Raab MP. The campaign was launched on 10 June 2019. (Registered 12 June 2019)”

Oh, and in case anyone is wondering about the still dormant company he set up with his mate Sir Greg Barker (supposedly to focus on “renewable energy projects”:

“Andrew Rosindell has to repay £42.86 by the Parliamentary Standards Commissioner after arguing invites were for ‘community event’…”

and £349 for a sat-nav:
https://www.telegraph.co.uk/news/newstopics/mps-expenses/5581638/MPs-expenses-25-most-ludicrous-claims.html

How much more support do developers need when, for example, Persimmon is making a profit of £77,000 on every house they build! 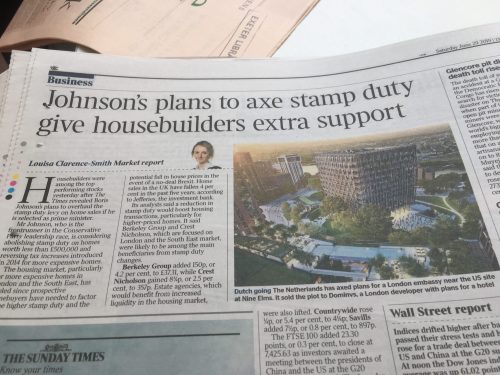 Sorry this isn’t a good photo but the headline to this post says it all. Just posting proof of source to show Owl didn’t make it up! 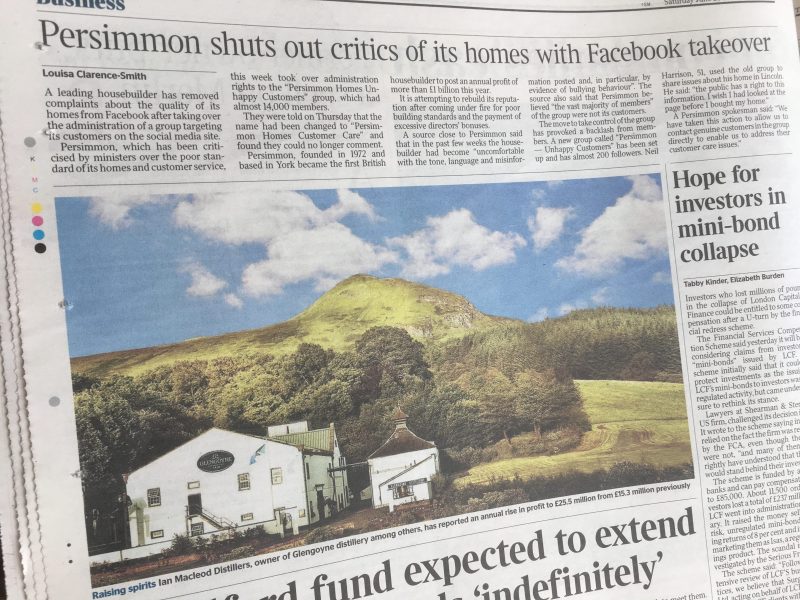 The Times: Theresa May exit interview

Just one question: who appointed her? Shouldn’t they take the blame for poor selection techniques? After all, they had known her for many years in another senior role. Perhaps they should be reviewing their selection process …..

“Great, well thank you for coming in for your exit interview, Mrs May. I know you’ve got a few weeks left to work out your notice but I’m sure you’re winding down now and not planning to do anything major.

Oh, you are? You’ve been meeting the president of Russia? Lovely, well, nice to catch up with old friends before moving on . . . And giving speeches on diabetes and housing and tourism and disability in the last week alone? Gosh. Could you have done some of that in the last three years while you were actually still in post?

You do seem to have quite a lot still in your Google Calendar for the next three weeks, too. And accounts have noticed that you’re trying to spend, um, £27 billion, which is a nice idea but should probably be one for your replacement, don’t you think? I’m sure you can appreciate what it’s like to have a predecessor who leaves a great mess behind to sort out.

Thank you for bringing back all of your IT equipment, although I notice that your laptop is a bit broken. The escape button seems to have been pressed rather a lot.

Let’s start with some standard questions from HR. Why are you leaving your job? Oh come on now, don’t cry. It’s a bit late for tears, isn’t it? Let’s try to be a bit more positive. Um . . . who did you get on well with? Your husband, good. Anyone actually in the office? Right, I’m glad he was friendly but he is technically a cat, isn’t he?

I was just looking back at your original application and you said at the time: “I’m Theresa May and I think I’m the best person to be prime minister.” With hindsight, do you think “only” would have been more accurate than “best”?

What did you hope to do with the job? Well, Nick and Fiona aren’t here so you must have some idea? No? None at all. OK we’ll leave that bit blank.

What did you least like about the job? Oh hang on, just slow down. Right, yes, yes, yes, OK, how are we spelling Francois? Shall we just say “every Tory MP” rather than listing them individually?

Could you perhaps tell me about a complex task you completed successfully? Well there must have been something. No, I’m not sure reorganising your cookbooks counts.

Maybe a target you had? OK, bringing down the number of people in Britain, that’s a good one. Although looking at the records the only significant flow of people were those leaving the government. OK, what about the biggest project you worked on? You say you thought you’d solved it but it didn’t work, so what did you do then? You tried it again and it didn’t work? Right and what then? You tried the same thing again, and that didn’t work? Oh dear. And then you were going to try it again before deciding, totally independently, that you were going to resign instead.

Do you have any work to go to? After-dinner speaking? Right. Do you have a backup plan? What about Strictly? They always need someone to get knocked out early with Anton.

And finally, any advice for your replacement? It’s not as easy as you made it look . . . Careful who your chancellor is, they’ll be your next-door neighbour . . . and salt is good for red wine stains. Right, thanks. Great. Good luck.”

Tory party diversity: the queue in Exeter for Johnson/Hunt hustings 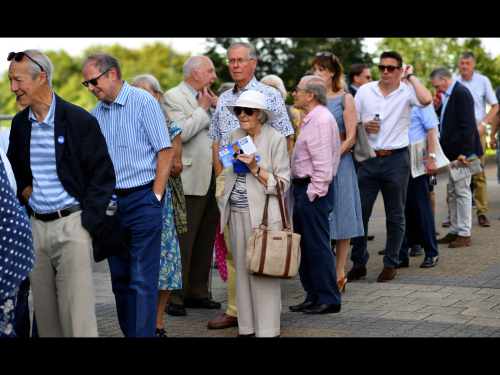 Winnie the Pooh on Johnson, Hunt, Owl and Rabbits

From a correspondent commenting on Johnson and Hunt talking, but not lustening to, their sycophantic supporters in Exeter today:

With thinking and listening seemingly in short supply within the corridors of power – these quotes from the Winnie the Pooh stories by A.A. Milne came to mind . . . . . 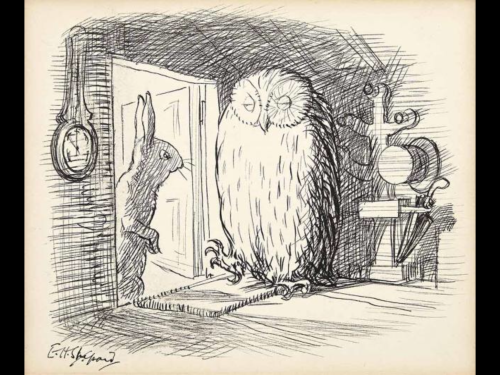 “Owl,” said Rabbit shortly, “You and I have brains. The others have fluff. If there is any thinking to be done in this Forest—and when I say thinking, I mean thinking—you and I must do it.” A.A. Milne 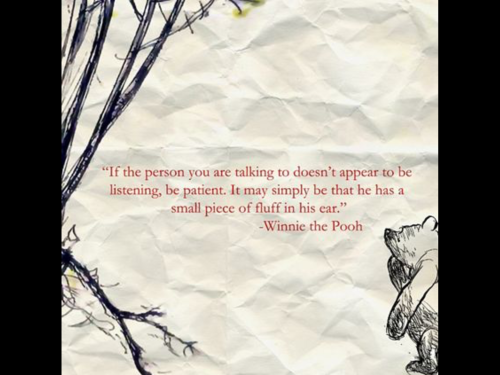 Over to you now Tiggers for yours – there have to be some differences or you would be working together – wouldn’t you?