“Universal Credit workers have been visiting sick patients in hospital to check they are actually unwell, a damning new review into the roll-out of the welfare system has revealed.

Department for Work and Pensions chiefs were found to be interviewing people awaiting NHS treatment to ensure they were on the right money and not abusing the system.

The practice has been condemned as ‘grotesque’ by a council scrutiny panel in London, where it has emerged hospitalised Universal Credit claimants have received shock visits from the welfare state police.

In one instance, DWP officers visited a person in hospital awaiting an operation because they had missed an appointment.

The behaviour was uncovered as part of a review by Islington’s Policy and Performance Scrutiny Committee, which has been tracking the full rollout of Universal Credit in Islington since June, reports the Islington Gazette. …”

“The Conservative Party received hundreds of thousands from a woman with ties to the Russian president.

The Conservatives received almost £250,000 in donations last year from the wife of a former minister in Vladimir Putin’s government, new figures revealed. Lubov Chernukhin, whose ex-deputy finance minister husband Vladimir fell out with the Kremlin, is among the most generous donors to Tory coffers. She handed over £146,750 in November and December in addition to £100,000 earlier in the year.

The party also accepted £150,000 from Ann Said, whose Syrina-born husband, Wafic, is a former broker of arms deals with links to Bashar al-Assad’s regime.

The biggest gift to the Tories in the fourth quarter was £1.5 million from musical theatre producer John Gore, a regular donor to the party.

The Construction vehicle manufacturer JCB handed over £666,667, while the former Tory treasurer Michael Spencer’s IPGL donated £506,188.
The figures emerged in figures from the Electoral Commission covering the final three months of 2018.

Jon Trickett, the shadow Cabinet Office minister, said: “These figures reveal a party paid for by the rich and powerful, with apparent links to repressive regimes, tax avoiders and arms dealers.

“The influence of big money diminishes our democracy and reminds people that even if you have a vote, your voice will still be drowned out.”

“All donations to the Conservative Party are received in good faith, after appropriate due diligence. Donations are properly and transparently declared to the Electoral Commission, published by them, and comply fully with the law.”

In the final quarter of 2018, the Conservatives received far more in donations than other parties, taking in almost £7.4m, more than four times the amount collected by Labour.

Jeremy Corbyn’s party took in £1.6m in donations during the three months, including a £490,300 gift from the Unite union.

Labour’s income from donations was outstripped by the £2,131,978 it received from public funds, much of it taxpayer-funded “Short money” to help opposition parties fund their work in the Commons.

Over the course of 2018 Conservatives took donations totalling more than £21m, compared with less than £7m for Labour and £2.8m for the Lib Dems.

“The Scottish Tory vice chair Richard Cook, who helped channel £435,000 to the Democratic Unionist Party was branded a “fraudster” and “cowboy” who deliberately masked “cancerous dark money” pumped into British politics ahead of the Brexit referendum.

In a Westminster Hall debate, the SNP MP Martin Docherty-Hughes called for an urgent review of current laws which allowed Cook, the chair of the Glasgow-based Constitutional Research Council (CRC) to exploit a legal loophole and avoid publicly stating the source of the record donation to the DUP.

The CRC is legally defined as an unincorporated association, permitted to donate money to political parties, campaigns and individuals in elective office.

Opposite of open democracy

Although the Constitution minister, Chloe Smith, told the debate that responsibility for unincorporated associations lay with the Electoral Commission, and that data held by them was a “treasure trove of information”, Docherty-Hughes said the way the DUP donation was organised was “the exact opposite of open, properly-functioning parliamentary democracy.” He questioned whether anyone in the DUP knew the source of the cash that was largely used to fund pro-leave campaigning on the UK mainland, and whether any “requisite due diligence” was done ahead of the money being accepted.

Under previous Northern Ireland electoral laws, donations to any of the major political parties were protected. The exact origins of £435,000 could have been revealed if the government had honoured its promise last year to back-date legal changes to the time of the 2016 referendum. This did not happen.

Doherty-Hughes said Cook, a Tory candidate in the 2010 general election in East Renfrewshire, who had been photographed alongside the former prime minister, David Cameron, and with the current leader of the Scottish Conservatives, Ruth Davidson was “a poster boy for the way in which unincorporated associations have been used to funnel vast swathes of dark money into our political process.” …”

Today’s debate in the House of Commons: 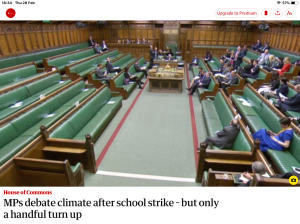 Tories on the left and Labour on the right (for a change!).

Parliamentary Independent Group “Independent group has ‘no mandate and no oversight – and nothing new’, says Swire

Er, sorry Hugo – doesn’t that apply to your party too which has no mandate, no oversight and nothing new?

And interesting that you discount them when the DUP (with fewer members) has held your party to ransom for the last two years!

The reality is that the Independent Group and Lib Dems really do have power now and that really worries you!

With Independent Claire Wright snapping at your heels you really have less clout, here and in Parliament, than you ever had.

Still, we won’t notice in East Devon since you rarely mention us or do anything for us.

Just one small point. If you don’t have a car and no buses are running in the early or late evening (as happens now) how do you get to Blackout House (sic) for this meeting (or any other meeting for that matter) from Exmouth, Axminster, Seaton, Colyton or any outlying villages? Only Cranbrook and Sidmouth are served by late (after 5 pm) direct buses, and a train journey would be horrendously expensive.

“Representatives from East Devon District Council (EDDC) will be available on Monday (March 4) to discuss what the role involves and how residents can put themselves forward for the election.

The East Devon district is divided into 32 electoral wards, represented by 59 councillors who are elected for four years.

The next election for parish, town and district council positions will take place on Thursday, May 2.

The drop in session on Monday will be held between 4pm and 7pm at East Devon District Council’s new headquarters at Blackdown House in Honiton.

In attendance will be the returning officer, deputy returning officer and electoral services manager. They will be able to discuss the process, as well as whether a prospective candidate is eligible to stand.

Nomination packs will be available on the evening.”

Parliamentary sovereignty: how did our MPs vote? They didn’t

Yvette Cooper’s amendment to hold the prime minister to her promise of three meaningful votes passed with a majority of 482.

And they both voted against other amendments to give MPs more say in the process.

So now you know.

“Tory councillors give themselves 300% pay hikes in homelessness hotspot”

“Tory councillors have awarded themselves pay rises of more than 300% in an area blighted by homelessness and food banks.

Matt Dormer, the Conservative leader of Redditch Borough Council agreed to a whopping 150% pay rise for himself.

And councillors with special responsibilities will get an extra £5,000 – a staggering 326% pay increase.

The Tories took control of the council last May and are in charge of their own pay for the first time in years.

Labour had previously frozen pay for a decade and its councillors voted against the new rises.

One said: “At the first opportunity these greedy ***** have taken money from council tax to put in their own, in some case already fat, wallets.”

Another councillor was so horrified she wheeled a trolley into the council chamber containing items destined for a food bank.

A source said: “It was a way of pointing out the absurdity of giving themselves more cash when there are people literally starving.” …

Some 638,000 local government and council workers, including 389,000 directly-employed staff and 249,000 with third-party outsourcing firms, earn less than £9 an hour or £10.55 in London, according to Smith Institute data for the Living Wage Foundation.

Another 335,000 health workers, including 204,000 directly-employed staff and 131,000 with outsourcing companies, pocket less than the minimum experts say is needed for a decent stand of living.

The tally also includes 98,000 university workers, 60,000 of whom are directly employed by institutions.

The 1.2 million army of low-paid workers perform vital roles such as cleaning, catering and security at public building across the country.

As predicted: Up-market fish and chip shop for Drill Hall!