A sister blog (The People’s Republic of South Devon – PRSD) asked Owl for an exit interview.  Here it is:

The Owl of East Devon Watch has been keeping an eye on the doings in East Devon since 2013, ruffling feathers and shining a light into its murky corners. We caught up with them as they fly the coup

PRSD: What inspired you to start the East Devon Watch?

Owl – East Devon Watch: I had been involved in a very local issue where I lived some years ago. At a meeting where it was discussed, I spoke up. After the meeting, a complete stranger came up to me and said “What we need is a blog about it – I can set it up if you will deal with content”. I knew what a blog was and I had done a bit of professional writing (but not journalism) before, but had never run a blog, so I decided to give it a go. It was tremendously influential and, when the issue was resolved and we no longer needed the blog, I was hooked.

Dealing with the issue brought me up against local councils and local councillors, and I had been unimpressed with them to say the least. I also suspected a good few were, shall we say, not particularly honest! I was appalled that local newspapers were happy not to look under stones or dig deeper, so I decided to change my focus to local politics and politicians.

PRSD: What’s the response been?

Owl – East Devon Watch: Well, that depends on who you are! I was overwhelmed by how popular it became really quickly – I got lots of positive feedback almost immediately. The vast majority of local people were crying out for REAL news about what was REALLY happening in the district, but those who were brought under the spotlight were very upset! Not least the late Councillor Graham Brown, who was exposed for many and various planning conflicts and who had to resign and our MP at the time, Hugo Swire, who hated the blog and insulted it and threatened to sue the person behind it several times! (Swire was recently voted 649th worst constituency MP out of 650). But I was careful to source my information carefully and he never followed through!

PRSD: You’ve been shining a light into the darkest corners of East Devon – what have you found, what’s surprised you and has anything made you smile?

Owl – East Devon Watch: What surprised me was how many people have been prepared to help me to investigate various stories – I had several tip-offs about things going on that councillors and officers were hoping to keep secret but somehow the secrets usually leaked! I built up a large number of “owlets” in the area who have kept me well-fed with juict titbits! I could not have kept going without them.

What has made me smile is knowing when I have hit a chink in some local ne’er-do-well’s armour that has shown them up for what they are – people who have only their own interests or that of their party at heart, not what is best for East Devon. Worthwhile! But there are still too many such charlatans in local politics – in it for gain and/or power, not for greater good.

PRSD: What’s been the most memorable of the stories you’ve covered, and what would you consider to have been successes?

Owl – East Devon Watch: Well, definitely helping to expose Councillor Brown: but it was a much bigger story than one rogue councillor and that wasn’t covered nationally or locally.

It was, in effect, a “shadow (and shadowy) pseudo-council” of high-ranking officers, some high-level councillors with planning interests and big developers – all unaccountably hiding behind a council-run and council-financed “East Devon Business Forum” which was essentially controlling pretty much all the major planning issues in the area – without published agendas or minutes, so initially, in secret. It was having a major effect on the Local Plan without anyone knowing about it. Developers were basically ensuring their sites were included whether suitable or not and with no evidence base for inclusion.

It was Claire Wright, who was then a newly-elected Councillor at East Devon, who took up the task of exposing it at council level and essentially single-handedly brought the situation into the light once the blog (and only the blog) had campaigned on it. Eventually, the council had no option but to disband the Forum and its parallel (also at that time, secret) “working party” at the council and a new, transparent, council-only Local Plan committee had to be set up and the whole Local Plan process had to start all over again after a 2-3 year delay where developers had been given free rein – because there was no Local Plan! So developers were in a win-win situation thanks to the Business Forum!

PRSD: What’s you’re view on informed blogs and websites having a role to play holding power to account?

Owl – East Devon Watch: I think, at the moment, it seems to be ONLY local blogs and websites holding power to account. Local newspapers in East Devon are simply just mouthpieces for (unedited and uninvestigated) council press releases and council dogma statements. The fact that our main local media gets 95% of the council’s lucrative “official notices” revenue doesn’t help! Local newspapers are now pretty much toothless tigers, mostly controlled by national groups with their own (usually Conservative-supporting) agendas. It makes it impossible for them to be investigative journalists – in fact, true investigative journalists are now sadly a dying breed. Blogs have to plug the gaps the shortage leaves.

PRSD: How has the East Devon political landscape changed since you started in 2013?

Owl – East Devon Watch: Enormously. Thanks to the exposing of just how badly the district was being served by its “old-boy, pale, male and stale” developer-led Tories, independent councillors became more and more acceptable, as people could see that austerity (which my council did enthusiastically) was a political choice not a necessity – and it was a choice people didn’t want. For years East Devon boasted about its low council tax with many people unaware that meant loss of vital services. East Devon Alliance returned independent councillors who made a huge difference in their areas, truly representing people not parties.

My big sadness was that, when finally an independent majority DID happen, a number of the new “independent” councillors immediately caused a split into two camps – the new cohort showing its true colours and aligning with the very Conservatives people had elected them to get out! I have nothing but contempt for such people and they were very surprised to find themselves in the spotlight they had thought they would avoid.

Everyone assumed that EDW was simply anti-Tory but it never was – so the “Independent Group”, which aligned with the “old boy, pale, male and stales” got a bit of a shock!

PRSD: You’ve had some focus on planning. It can be a controversial issue. How do you find the current planning situation?

Owl – East Devon Watch: Planning is a minefield, where only developers can avoid the mines. For the individual who wants a small extension or a new garage, they are bogged down in an expensive and bureaucratic process where officers, thin on the ground, have the upper hand and can make them wait and wait for a simple answer, because they are far too busy serving the needs of big developers. For the developer, they VERY much have the upper hand these days (thanks to David Cameron giving them total control of the planning process with no stops when he became coalition PM). They tie planners in knots and eventually pretty much get to build anything they want, anywhere they want. They have the vast wealth to employ the best lawyers to ensure they can game the system and win.

Councillors are just rank amateurs when it comes to complex planning issues and find it hard to say no to officers or developers because it will involve a council in massive expenditure to stand its ground. With little money available, they play it safe and mostly say yes to big developers as they know they have the resources to beat them down.

Officers and developers use highly-questionable statistics to show that development must continue at whatever speed they find gets the developers the biggest profits. It’s a system that is rigged and that will never get the right homes built in the right places. The absence of social housing is a complete disgrace.

Sadly, with the new government I see things getting much worse.

And don’t get me started on “affordable housing’ which has never been affordable!

PRSD: What, if any, plans do you have now?

Owl – East Devon Watch: I’m involved in several things that are nothing to do with councils or politics and I was spreading myself very thinly over everything. Now, I can give those things the time they deserve. And DEFINITELY a holiday!

I couldn’t continue the blog for a district in which most people will not realise they have made some very bad political choices until it is much too late to do anything about them and where the government is going to make councils poorer and even more impotent about anything they disagree with – party whips will reign!

But I much admire PRSD for continuing the battle in its area!

So, the results are in.

Owl has had enough*

East Devon has the representation it deserves:

So, THEY at least will be pleased to hear that Owl has thrown in the towel and is flying off to pastures new.

Enjoy the next 5 years – Owl hopes you get what you deserve.

It was a pleasure to serve you – until this week! 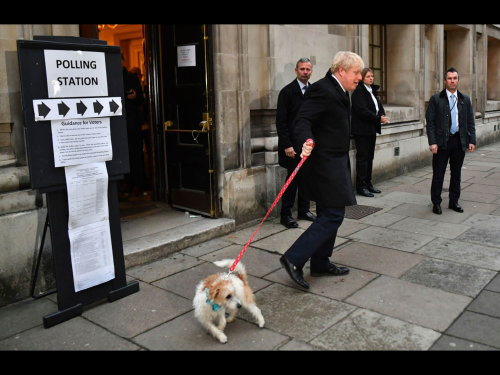 Jupp with his minders – including a very, very rich, elderly Tory MP in a towm=n which, thanks to his Government, has a lot of sub-standard houses and no centre:

Boris Johnson too frit to vote in his own constituency

“General Election 2019: Boris Johnson Kicked Off Polling Day… By Not Voting For Himself”

” … restrictions, spelled out in the Ofcom code, apply to all broadcasters including the BBC, Sky, Channel 4 and ITV. They apply to community radio stations, music channels, and political panel shows alike.

However, these rules actually don’t apply to newspapers – as you’d probably guess by the fact that national papers can actually call on their readers to vote for particular parties.”

“Silent periods have also been considered for online political advertising. The UK currently bans ‘political advertisements’ from TV or radio; parties are instead given limited airtime for party political broadcasts. Conversely, print media ads, for example, posters or newspapers, whose principal function is to influence voters in elections or referendums are exempt from these rules, and are not subject to any black-out period.”

Owlis not advertising and, if it helps, feel free to onsider East Devon Watch as an online newspaper.