Well, well, well – Cohen, who came to EDDC with such glowing references is now surplus to requirements! How convenient – all the blame and all the questions about everything that has gone on under his watch can leave with him … and scrutiny is avoided because he won’t be there to answer any questions …

Here’s the CEO’s “explanation” for the departure:

“Dear Cllrs,
As you are aware we are in the process of preparing the budget for 2020/21 and facing the difficult decisions that will be required.

As part of these preparations, I have had to give consideration to the reduction in workload for the Deputy Chief Executive Officer now that our office moves have taken place and the fact that this role is now effectively redundant.

For this reason, it has been agreed that Richard Cohen will leave the organisation on 31 March 2020. This has been the subject of consultation with the Leader and relevant portfolio holders.

We are currently also consulting with Richard’s direct reports [sic] and will soon be confirming details of changes to reporting lines and roles and responsibilities in the management team.

I am sure you will join me in thanking Richard for all he has achieved during his time at the Council and wishing him the very best for the future.

Just remember: a redundant role cannot usually be filled for between 1 and 2 years … so how long before Williams declares himself overworked and in need of better remuneration … but again remember that for a while we shared him 50/50 with South Somerset – till they paid us to take him back early!

PegasusLife now own the former EDDC HQ site in Sidmouth. A comment from the Guardian on the poor value of their retirement flats:

“.. you might be interested to know that another of these retirement property firms (Oaktree Capital-owned Pegasus Life) has just jacked up its monthly fees by around 50%. They did this around a fortnight before a relative of mine was due to move into a new build scheme, which is about a year behind schedule. Her monthly fees (for a one-bed flat costing ~£500k) were set to go from £600 to around £900. Absolutely outrageous.” 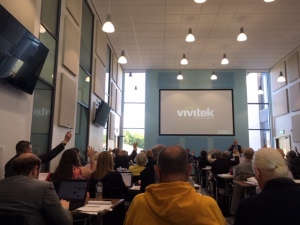 “View from the public gallery at the first Annual Council EDDC meeting (22 May 2019) in the cramped, airless, Council Chamber, poorly provided with natural light. First time visitors and also, no doubt, the impressive number of newly-elected councillors, were in for some further surprises. For instance, people-flow aspects in the arrangement of the room were awkward, as Cllr Moulding signalled early on, when he asked the vicar leading the opening prayer, “Do you want to slip out the sideway or promenade down the middle?” The single-file queue to get out of the room at the end of the meeting, only one door being open, raised questions of health and safety in an emergency.

One veteran former Member of the Council had to point out that in these purpose-built new premises, disabled access was problematic. Other observations overheard in the public gallery questioned why the seating plan allocated to the East Devon Alliance , the third biggest group, was in the back row only, in three separate areas. There was also astonishment that, surrounded by idle hi-tech screens, the CEO had used the oldfashioned, time-wasting way of counting votes.

Some of these evident ‘ teething problems’ can of course be swiftly resolved, under the welcome new cross-Party Leadership.”

Hitch in town and parish council count while couple got hitched

The problem with two-site operations for EDDC HQ is that sometimes the south hand doesn’t know what the north hand is doing.

The count at Exmouth had to be halted for 45 minutes and the room cleared so that a double-booking – a wedding – could take place.

Shareholder lose money one day, debtors get nothing, hedge fund starts it up again next day with no debts. Who profits? Not us.

“The government contractor Interserve has gone into administration after its largest shareholder, the US hedge fund Coltrane, led a rebellion against financial rescue plans drawn up by the company’s lenders.

About 16,000 small shareholders have lost their investment, with the business sold to hedge funds and banks via a “pre-pack” administration which means Interserve, which employs 45,000 people in the UK, can continue trading.

Interserve has thousands of government contracts including hospital cleaning, school meals and maintenance of military bases in the Falklands. It also runs parts of the probation service, which was part-privatised under a heavily criticised process overseen by the former justice minister Chris Grayling.

The company and the Cabinet Office, which oversees state suppliers, said there would be no disruption to the public services that Interserve manages and job losses were not expected in the short term and the pension scheme was protected.

Interserve’s chief executive, Debbie White, said: “Interserve is fundamentally a strong business and with a competitive financial platform in place we see significant opportunities as a best-in-class partner to the public and private sector.”

But the failure of another outsourcing firm, little more than a year after Carillion’s collapse, sparked fresh calls by trade unions and Labour’s business select committee chair Rachel Reeves for public services to be taken back in-house. …”

… as its builder is on the ropes and 45,000+ people could lose jobs. Unless we, the taxpayers, pick up the bill – again.

“… The new headquarters cost the council £8.7m, while an additional £1.5m was spent on upgrading Exmouth Town Hall – where one third of the council staff are to be based.

The Knowle has been sold to developers Pegasus Life for £7.5m, which has been granted planning permission to convert the building into a 113-apartment [top-end luxury] assisted-living community for older people. …”

It has been estimated by a local property developer that the new HQ has a market value of no more than £3.5 million.

Just about every year, Ottery independent councillor Roger Giles – whose environmental credentials are strong – has petitioned for EDDC councillors and officers to introduce parking charges to encourage them to think more about the need to use their cars. Every year, the Conservative majority has voted him down.

Maybe this will change – though with rural public transport so poor, it seems likely that they may have to stump up the cost! Particularly when what is left of it often stops so early!

Owl’s guess – allowances and salaries will be raised to cover the extra cost.

“The AA says plans to charge drivers up to £1,000 a year to park at work could become a “poll tax on wheels”.

Under plans to cut congestion, reduce pollution and raise money for public transport, a workplace parking levy is being considered by at least 10 councils.

The charges would affect businesses with more than 10 parking spaces and the AA said the costs would be passed on to workers.

The levy has already been rolled out in Nottingham where four in 10 companies pass on the costs to staff.

Since it was introduced in 2012, the charge has raised £53.7m which has been used to improve Nottingham’s tram network.

Hounslow Council in west London is proposing to charge between £500 and £1,000 a year for every parking space and at least nine other councils are considering imposing the levy.

Other cash-strapped authorities are likely to consider the measure because of a shortage of funding for road improvements and public transport.”

An “explanation” of the Knowle Flog It fiasco appears in today’s Sidmouth Herald. It appears to be printed verbatim from a council statement.

Owl wonders why this statement was printed without challenging some of its very, very vague claims – one hesitates to use the word ‘facts’. “Journalism”? Not as Owl knows it!

Guess some answers MIGHT come from the Freedom of Information request by an Exmouth resident on 8 January 2019:
https://eastdevonwatch.org/2019/01/10/the-knowle-flog-it-scandal-rumbles-on/

It seems Councillor Skinner paid £400 for the table he wanted so urgently – earlier reports mentioned it being valued at a very low price, much lower than £400. Which is correct? And including just how many chairs?

Who decided on the “three disposal methods? It does not appear to be the Asset Management Group.

Which councillors have bought items? Have they declared these on their Registers of Interest?

Which groups were offered ‘free’ items, how were they chosen and by whom? Have any of these groups taken items – and if so, which groups and how much did they pay for them?

What exactly is the Chairman’s Civic Fund and how and when has it been used recently and in the past? What are its rules? Who oversees the disbursements?

Which local groups and charities will be able to bid for what is left after officers and councillors have taken their pick? How have they been chosen and by whom?

Are internal and external auditors happy with the procedures?

Will the Scrutiny Committee be scrutinising these actions?

Owl is sure readers have many more questions!