The Victoria and Albert Museum in London has a current exhibition (soon to close) called “Disobedient Objects” which the museum describes as:

“From a Suffragette tea service to protest robots, this exhibition is the first to examine the powerful role of objects in movements for social change. It demonstrates how political activism drives a wealth of design ingenuity and collective creativity that defy standard definitions of art and design. Disobedient Objects focuses on the period from the late 1970s to now, a time that has brought new technologies and political challenges. On display are arts of rebellion from around the world that illuminate the role of making in grassroots movements for social change: finely woven banners; defaced currency; changing designs for barricades and blockades; political video games; an inflatable general assembly to facilitate consensus decision-making; experimental activist-bicycles; and textiles bearing witness to political murders.”

A major exhibit is a wall of recent sayings associated with civil disobedience: 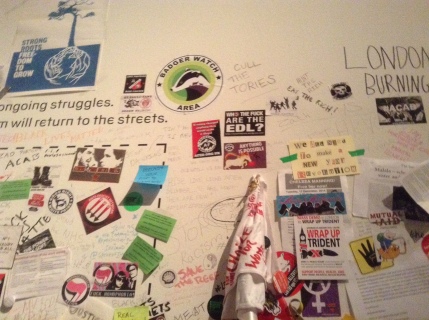 This exhibit wall was curated by the V and A and, as far as we know, the museum has not been reported to the Metropolitan Police.