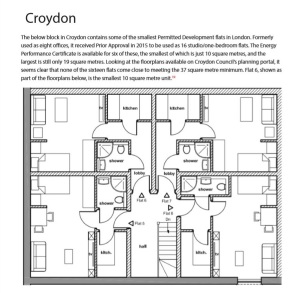 Offices to homes permitted development has led to some of the tiniest micro-flats being built in Croydon.

“PDR, as it is known, has managed to strip local authorities of their planning powers, but left them to deal with the costs and consequences arising from such developments. The government is considering extending PDR, allowing shops to be converted into flats or for extensions to be built without requiring any planning permission.

In Croydon, where the local authority used legislation to block any further office-to-resi conversions in the town centre after 2014, senior councillor Sean Fitzsimons has called such flats, “the slums of the future”.

But that was not before planning permission had already been given for the lucrative conversion of offices to at least 2,700 flats in the borough, and where some of the “micro-flats” are being marketed to Chinese investors, with one-bed apartments fetching £280,000.”

‘Political pygmies’ to blame for Croydon’s ‘slums of the future’

“An influential figure in British architecture has hit out at office-to-flat conversions – of which there have been thousands in Croydon – describing them as “ghastly little f**k-hutches”, and all thanks to policy which is being ruined by “political pygmies”.

“Copley has also discovered that 1,837 London PDR flats are smaller than the legal minimum standards, and that 240 were less than half this lowest threshold.

In a statement issued from Copley’s City Hall office they said, “Some of the worst examples are seen in Croydon where 80 per cent of properties identified failed to meet minimum space standards, including one development where the smallest flat was just 10 square metres.”

That flat is in Urban House on Cavendish Road in West Croydon.”

Slums of the Future: Croydon has capital’s smallest micro-flat