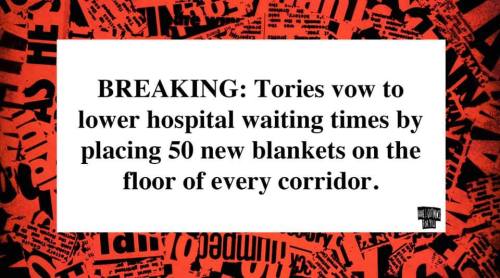 “Why don’t you look at it now, prime minister?” asked ITV Yorkshire’s Joe Pike, armed with that image of a four-year-old boy being treated on a hospital floor in Leeds.
‌
After finally glancing at the picture, Boris Johnson then ludicrously pocketed the reporter’s phone as if he were confiscating a child’s irritating toy. “It’s a terrible, terrible photo…but what we are doing is supporting the NHS..,” he finally blurted out. The clip has had six million views and will get many more millions on prime time TV channels.
‌
At last, in this tightly choreographed Tory election campaign (and even the ‘unscripted’ bits of Johnson’s speeches are carefully scripted), here was a real moment. It was a moment that told us a lot about the PM’s irritable side, his unconventional conduct and his failure to empathise properly with a lived experience of the British public.
‌
Authenticity has been in such short supply these past few weeks, but things don’t get more authentic than a child with suspected pneumonia lying on some coats on the floor because his NHS hospital can’t find a bed. And this whole exchange mattered precisely because it bled into the narrative that you can’t trust Johnson – with the truth or with the NHS.
‌
Many of those who know Johnson best know he rarely pays any attention to anything unless he really feels it’s important. It’s perfectly plausible that he hadn’t even seen the Daily Mirror front page, and that’s why he didn’t want to be ambushed with it.
‌
The irony is that Johnson had already told LBC’s Nick Ferrari hours earlier that “I sympathise very much and I apologise to everybody who has had a bad experience”. But he had also told LBC “we’re a new administration” and “we want to invest massively in the NHS”. Both statements were part of the wider strategy of saying he’s only been PM for 4 months and somehow has nothing to do with the previous 10 years of Tory rule.
‌
Being forced into saying “it’s a terrible photo” is damaging enough. But saying he is “supporting the NHS”, after years of a funding squeeze that failed to keep pace with rising pressures, is politically much more damaging if it lays bare the need for “real change”, as Jeremy Corbyn puts it.
‌
When health secretary Matt Hancock was then ‘scrambled’ (hacks love that word) to Leeds general infirmary, he too let the cat out of the bag. He empathised better than the PM, when put to him this was not a one-off but a systemic problem across lots of A&Es, he replied “demand is rising..[we’ve] got to make sure the funds go up to match that.”
‌
That was an admission that funds have not rising so far to match the pressures facing the NHS. The promise of jam tomorrow isn’t much comfort when you’re hungry today. Leeds general is to get a bigger children’s A&E ward, but many years too late. And when Hancock praised the ‘brilliant’ Leeds staff, that only further exposed that it’s political decisions have left those staff struggling.”