Exmouth town councillors have objected to detailed plans for 317 homes at Goodmores Farm which also include land for a new primary school and commercial use.

East Devon Reporter eastdevonnews.co.uk
Members backed Marley Road residents over their concern at their street being used to access part of the mooted development.They also lamented just five per cent of the proposed dwellings being ‘affordable’ and questioned the need for a brand-new school.Blueprints for the site, off Hulham Road and Dinan Way, already have outline planning permission.

Eagle Investments Ltd is now seeking the go-ahead for a reserved matters application.

This details include layout, scale, appearance and landscaping for 317 residential units, associated roads, open space, and an attenuation basin for water run-off. Sixteen of the homes would be affordable.

Five-and-a-half acres of the site can be utilised for mixed-use employment and commercial purposes and the provision of land for a primary school.

Marley Road resident Bob Horlock spoke on behalf of the 12 househlds in the street and raised concern that it would be used for access to a cul-de-sac of nine homes on the new development.

Mr Horlock said residents had been told at a public consultation event in 2014 that there would be no access onto the site from Marley Road.

He added that the ‘narrow, unclassified country lane’ is popular with cyclists and walkers – and a significant increase in traffic would raise the risk of an accident.

District councillor Paul Millar, who represents the Halsdon ward, bemoaned the low number of ‘affordable’ homes and told the committee: “This is a daft scheme which does nothing to relieve the number of people on the housing waiting list in Exmouth.” 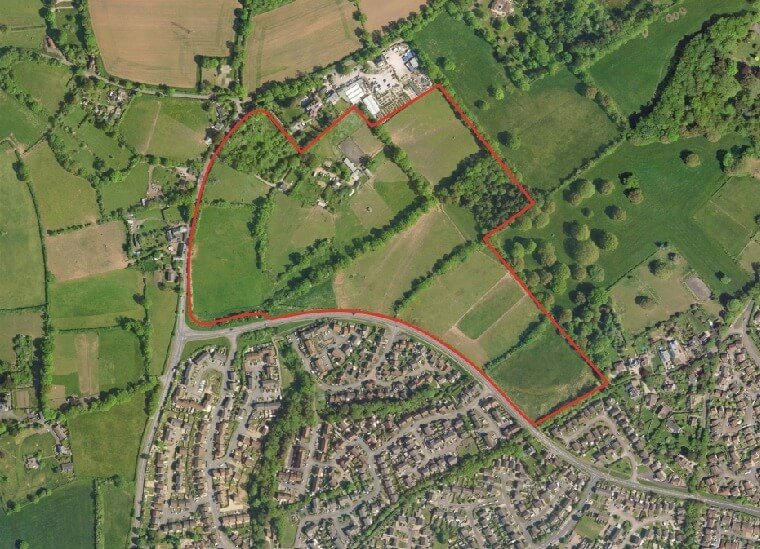 An aerial view of the land earmarked for development.

He also questioned why a brand-new primary school was proposed when there was ‘ample space’ for existing ones in the town to expand.

Councillor Fred Caygill said the development had been ‘on the cards for over 20 years’ but backed Marley Road residents, who he said were ‘rightly concerned’.

He added: “Sixteen affordable houses is a bit hard to swallow.

“I would think that, before anybody goes down the road of building a new school, they revisit the need and requirement. More importantly, medical facilities are needed in this part of the town.

“If we are going to put more houses and more people into Exmouth, we need to look at something like medical facilities rather than a school, if it’s not needed.”

Cllr Mike Rosser said the plans were ‘cramming too many houses’ on the site and that gardens were ‘minute’.

He also lamented there being ‘no recognition’ of climate change and ‘no attempt to encourage’ renewable energy.

He added that he continued to support the development in principle – ‘as long as the details are got right’.

Councillors voted to object to the scheme.

Their concerns included the access from Marley Road, Dinan Way safety issues and the amount of affordable housing.

They also sought reassurance over the agreement for a new primary school and a construction management plan.

East Devon District Council will decide the fate of the application.