The UK will suffer the heaviest Covid-19 impact of any major country this week as signs of faltering spending raise fears that the recovery is already running out of steam.

City forecasters predict official figures will show a 21.3pc collapse in ­output between April and June, when the economy languished in lockdown.

The damage to the UK is expected to be twice as severe as the 10.6pc blow taken by the US economy.

David Page, senior economist at Axa Investment Managers, said: “It is going to be the worst quarter that anybody has ever seen.

“We entered the lockdown relatively later than the European economies which puts more of the lockdown in the second quarter. But we also kept non-essential retail closed for longer.” 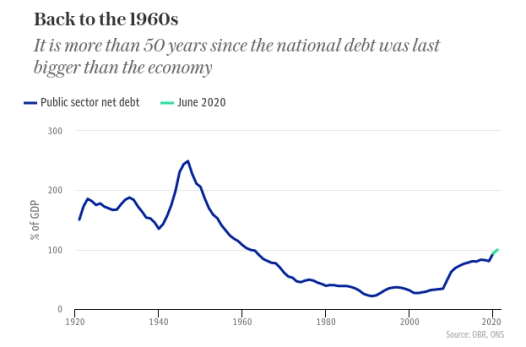 The Bank of England has warned that the UK is more exposed to lockdowns due to its higher share of “social consumption” in the economy. Spending on activities involving interaction with other people – such as cinemas, restaurants or live sports – accounts for around 13pc of the UK economy, compared with around 11pc in the US and 10pc in the Eurozone.

The Bank forecasts an 18pc bounceback in the current quarter as shoppers resume spending, but Mr Page added that “it is difficult to see it maintaining that pace”.

Philip Shaw, chief economist at Investec, added: “The test will come in the autumn when there are no further ‘lockdown releases’ to boost the ­economy, some restrictions – perhaps just local – are imposed and programmes such as the furlough scheme are wound up.”

Confidence is being sapped by concerns over another wave of job losses after Barclays economists warned that spending growth was “peaking” in late July. New Bank of America data also suggested that job worries are back at the peaks reached during lockdown, dampening the recovery as households slam the brakes on purchases.

The furlough scheme is being wound down ahead of its end in October. The bank’s consumer confidence indicator has also pulled back to its lowest level since mid-June, driven by unemployment fears.

Robert Wood, economist at Bank of America, said “caution abounds over medium-term spending plans” and consumers that saved during lockdown are now more hesitant about purchases.

Fabrice Montagne, chief UK economist at Barclays, also warned of rising consumer concerns, adding: “The fears of unemployment when policy support is phased out will likely act as a drag.”

However, spending in some of the ­industries hardest hit by Covid-19, including retail, restaurants and hotels, has rebounded back to last year’s levels, revealed Barclays. Britons increasingly switched spending from the likes of food and drink to hospitality as consumers “normalise” their purchases, said Mr Montagne.

It came as OpenTable figures revealed that diners have rushed back to restaurants to take advantage of the Chancellor’s discount scheme. The number of seated diners from online, phone or walk-in reservations was back in positive territory year-on-year for the first time since early March on Monday, Tuesday and Wednesday.