Localism was all about giving local communities a say in how their area was developed – can anyone spot it here? – Owl 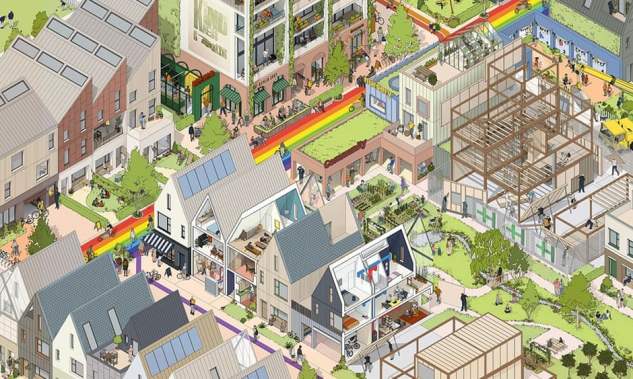 Could it be farewell to the traditional back garden? Architects shortlisted by the government to design prototype housing in England have called time on fenced-off sanctuaries and want to replace them with communal gardens to boost social integration.

Ministers have shortlisted six teams of designers to be teamed with volume housebuilders in an attempt to make the next generation of housing estates greener, healthier, better for elderly people and quicker to build. Several of the winning designs in the government’s Home of 2030 contest show communal spaces running right up to front doors, shared vegetable gardens and outdoor community dining areas.

One of the designs suggests four homes built around a courtyard garden that the residents can also book via an app for private use. Otherwise it would be shared. The proposals run contrary to the bulk of new housing that is built with private gardens, however small, partly because of planning rules that mean homes have to be spread out for privacy.

A design by the architecture firm Perpendicular, whose director says ‘we need to remove the ubiquitous rear garden’. Photograph: Homes for the Future

Under the schemes, which have been awarded £40,000 development grants, homes could be self-built, include straw walls or green roofs, and some of the prototype estates are designed as car-free zones.

“We’re on a crusade to abolish greed-driven identikit development on soulless estates,” said Chris Brown, the director of Igloo, whose designs for free, self-build estates with communal gardens are among those shortlisted. “After Covid-19, people will want their towns and cities back, to make beautiful places where home schooling and working from home is designed in – not an afterthought – and where the climate, nature and community are prioritised over profit.”

Patrick Usborne, the director of Perpendicular, which oversaw another winning entry using wood panels made from British-only timber, said: “There’s an English perception that owning your castle needs its own land. But if we are to improve community cohesion we need to remove the ubiquitous rear garden and bring together external spaces for the community.”

The contest has the backing of the housing minister, Chris Pincher, as well as ministers with responsibility for elderly care and energy. The government gave designers four key requirements. The homes should be adaptable to how needs change as people become older, have net zero carbon emissions, promote healthy living, and be deliverable in large numbers.

The six finalists announced on Sunday have been told they will be introduced to developers bidding to build on public land managed by Homes England, to explore the possibility of developing bids. 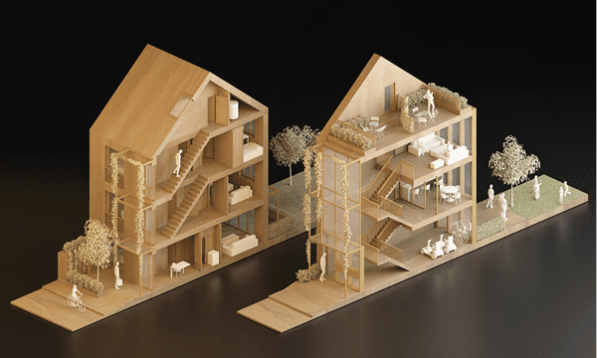 Homes with a central shared garden designed by Openstudio. Photograph: Homes for the Future

But entrants fear their designs will be resisted by builders determined to stick with existing blueprints for homes. Volume housebuilders are poised to erect hundreds of thousands of new homes to their standard designs on greenfield sites under planning changes announced earlier this month.

“The momentum in the system to build standard speculative estates is so strong,” said Brown.

Usborne added: “There may not be enough incentive from the government to make change and there’s not enough appetite in the housebuilding businesses.”

Michal Pajakiewicz, the director of Studio Open, which is proposing the bookable garden, said he hoped housebuilders would understand that people are starting to use their homes differently, with more working from home.

Pincher said: “This competition demonstrates the best of British design being brought to bear on a key issue for today, and future generations: delivering homes that are good for the planet and that promote healthy, independent living for older generations.”