But no parking spaces

“We cannot cram more vehicles onto the roads. Unless we blow up and redevelop the whole city, that won’t change, so the only way to support this is for developments that are car-free. This is the way forward, and these homes are badly needed so I will vote in favour.” – Cllr Rob Hannaford. 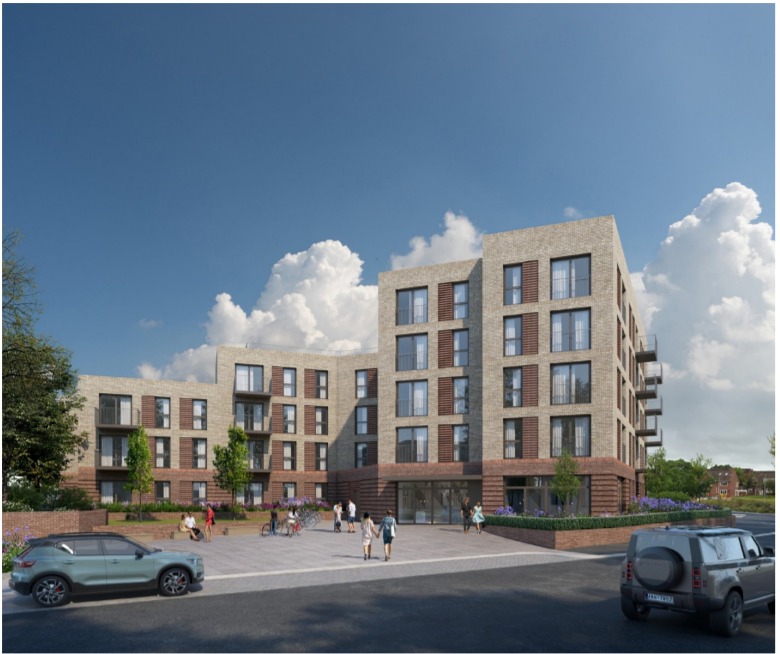 Plans for 51 new apartments on vacant land at the former Exmouth Junction have been approved.

It is the second phase of the major development next to Exeter’s Morrisons supermarket to be approved after Exeter City Council’s planning committee gave the go-ahead for 400 new homes, a care home, and new green spaces in March.

The flats will be built on a brownfield site historically been a railway goods yard, rail sidings and coal concentration yard, before most recently being used for surface storage.

As part of the second phase of the development, Eutopia Homes asked for permission to add an L-shaped apartment block as a ‘gateway building’ into the main site.

The new apartment block will consist of 26 one-bedroom flats, 20 two-bedroom flats, and five three-bedroom flats, with the ground floor featuring a residents’ entrance and communal amenity area, lift to all floors, plant space and internal bike and bin store.

The flats would also have a ‘communal amenity’ on the ground floor, roof terraces, private outside space for some ground floor units, over 100 cycle spaces, and there would be improvements around the entrance to connect to existing cycle paths and widening existing footways for pedestrian access to Prince Charles Road. It will be a ‘car free’ development.

Cllr Richard Branston raised concerns over whether the scheme would be ‘over development’ and whether the car free nature would result in parking pressures in the surrounding areas. Cllr Yolanda Henson said that she didn’t think it was a high quality scheme and while there was a need for more housing, “this too big in an area and crammed in.”

But Cllr Rachel Sutton said that the council cannot get away from the fact there is a desperate need for new homes for people struggling to get on the housing ladder.

She added: “It is difficult as everyone says stop building in the suburban areas and the fringes of the city and when an application comes in for a brownfield site, people say they don’t want that either. If you don’t take brave decisions to put forward car-free development, you’ll never have car-free developments, and there is more to like than not to like.”

Cllr Rob Hannaford added: “We cannot cram more vehicles onto the roads. Unless we blow up and redevelop the whole city, that won’t change, so the only way to support this is for developments that are car-free. This is the way forward, and these homes are badly needed so I will vote in favour.”

And Cllr Ruth Williams added: “This will be ideal for people to rent properties and not to need their own transport. We have to build up rather than out as if we build out then we have to use green spaces. We are desperate to find more social housing for Exeter, and those who need homes would be welcoming this development.”

“It will follow the same architectural approach as the main Exmouth Junction development and act as a ‘gateway building’ to this site. It will make effective and efficient use of the land in accordance with local and national policies. It will deliver housing helping the Council to achieve a 5 year land supply.”

Councillors voted by seven votes to four to approve the scheme.