Council officials have published planning decisions containing derogatory remarks, which now have to be reviewed by a court. 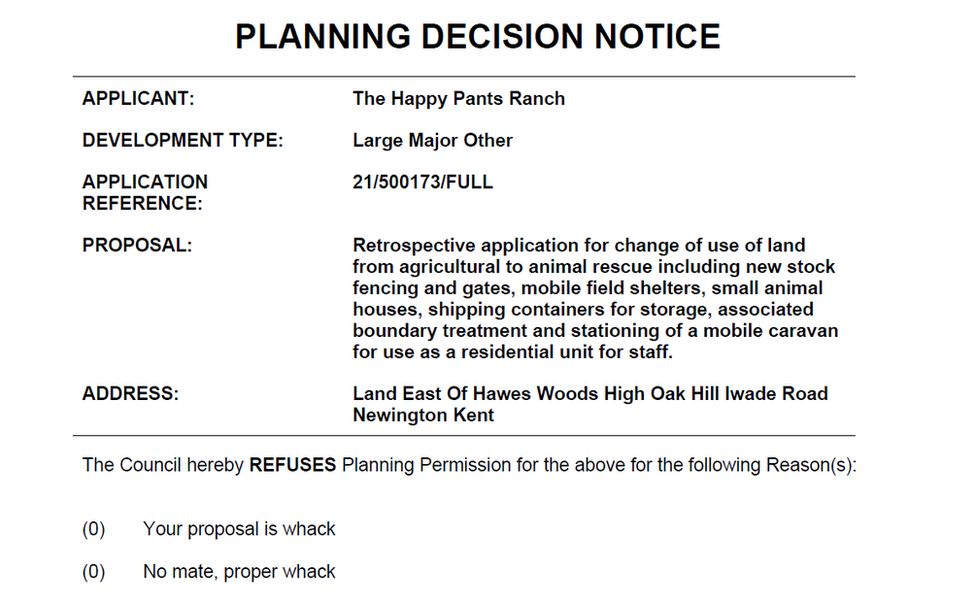 The notice was published to Swale Borough Council’s website and is legally binding, despite being issued in error

Owner of The Happy Pants Ranch in Kent, Amey James, has been waiting for a change of use decision for six months.

She was “shocked” when it was rejected on the grounds that: “Your proposal is whack. No mate, proper whack.”

Swale Borough Council said the published decisions are legally binding and must be officially overturned.

Despite being an “administrative error”, the decisions must now go through judicial review.

In a statement the authority said: “This language was used by a junior officer with no knowledge of any of the applications, who believed they were working solely in a test environment and that the comments would never be published.”

It means a delay of about three months before the correct decisions on each of the five applications can be considered.

One application, to partially demolish The Wheatsheaf in East Street, Sittingbourne, to build flats and a micropub, was approved on the grounds of “Incy. Wincy. Spider”.

A third was approved with the text “why am I doing this am I the chosen one”, and the fourth simply listed numbers one to 20.

Ms James said she “nearly had a heart attack” when she read the decision as “the whole future of the charity hangs on that”, and now the development of the ranch faces further delays.

The sanctuary cares for 350 rescued or special needs animals on farmland, and was recently served with noise abatement notices over its loud cockerels.

Ms James said the blunder showed the “constant poor management, security and communication of the council”.

An application for a farm in Marden to convert an outbuilding into a holiday let was refused with the explanation “Don’t even bother re-applying lol. Not even joking lmao”.

This application was also rejected, after being issued in error

Leader of Maidstone Borough Council David Burton said the error was “regrettable” and added: “I would like to apologise for any offence caused.”

Swale Borough Council has made no public apology for the error, but did offer an explanation: “Officers for Mid Kent Planning Support team were testing a solution for issues with the software behind the public access site.

“During this testing an error occurred, which published dummy decision notices on five randomly selected Swale applications on the live system.

“Legal advice has subsequently confirmed they are legally binding and must be overturned before the correct decisions are made.”

Swale Borough Council estimates it will cost £8,000 to overturn the five decisions.