The UK government has spent at least half a million pounds on legal fees trying to prevent the release of information under Freedom of Information (FOI) legislation over the last five years, openDemocracy can reveal.

At least six government departments spent heavily on legal challenges to decisions from the information regulator, the Information Commissioner’s Office, to release information in response to FOI requests.

The Department of Health and Social Care spent almost half a million pounds on legal costs challenging decisions from the ICO that they must release information FOI, including spending more than £129,000 fighting on a single case, to try and stop the release of ministerial diaries. Eventually, a judge ruled that most of the information should be released, against the wishes of the government.

Get dark money out of UK politics

Sign our petition to tell the government to tighten electoral laws and shine more light on political donations. We need to know who is giving what to our political parties.

The fees included outside counsel as well as the cost of lawyers from the Government’s Legal Department. Some of the cases are still on going but in most the government was ultimately forced to release the information.

Commenting on openDemocracy’s findings, Duncan Hames, director of policy at Transparency International UK, said: “These figures will no doubt come as a shock to taxpayers who have effectively bankrolled these attempts to obstruct the public’s right to know.

“The government should stop wasting time and taxpayer money opposing legitimate freedom of information requests and do what it’s required to by the law,” he added.

I expect that for the government, spending £20,000 to make a journalist give up is good value

The Department of Health and Social Care (DHSC) spent £13,000 trying to avoid having to disclose the register of interests of its special advisers to The Times.

In another case, DHSC spent £20,000 trying to stop journalist Sid Ryan from obtaining information about fire safety in hospitals. Ryan was told his Freedom of Information request was “vexatious”, but a tribunal disagreed and ruled against the government.

The tribunal recognised Ryan’s work as having serious purpose and value. But during the appeal, a witness for the Department of Health said: “The department’s view (which I share) is that Mr Ryan is trying to prove a conspiracy theory of his own.” It was suggested that the department should apologise to Ryan for making that remark.

Ryan left journalism shortly after the tribunal. He told openDemocracy: “The process was so slow, so physically and mentally draining for the requester and to be branded as vexatious and a conspiracy theorist after all that work was deeply upsetting.

“For me, that whole process was a complete waste of time. But I expect that from the government’s perspective, spending £20,000 to make an investigative journalist give up is very good value for money.” 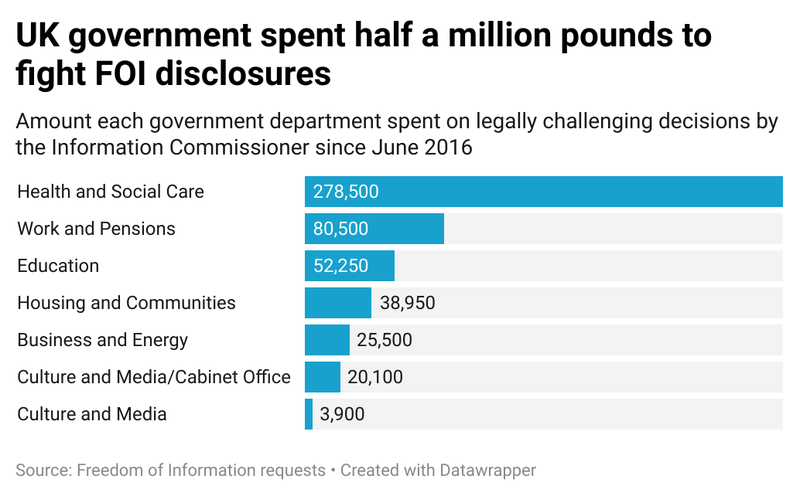 The Ministry of Housing, Communities and Local Government spent £38,950 trying to block a request from another journalist, who had asked to see copies of official ministerial diaries. The ICO ruled that the information should have been released, but the department appealed to the tribunal.

The appeal was later dismissed, and internal communications obtained by The Guardian revealed how the government knew it had little chance of succeeding.

Other government departments were unable to tell openDemocracy how much they had spent on appeals, claiming that it would cost too much to investigate and provide figures. This includes the Cabinet Office, which runs a controversial Clearing House unit that vets FOI responses from across government.

News of the scale of government spending to avoid transparency comes ahead of a parliamentary inquiry into Freedom of Information launched in the wake of openDemocracy’s revelations about the Clearing House.

openDemocracy also asked for how much the government had spent on fighting the ICO’s ruling, only to be told that final invoicing costs have not yet been confirmed.

Details of the scale of government spending to prevent FOI disclosure come as a new poll for openDemocracy found that seven in ten UK adults were concerned by the sharp fall in FOI responses across government departments.

Views on government transparency are shared across the political spectrum, with 83% of Conservative voters and 76% of Labour voters agreeing that it is important for democracy, according the poll, which was carried out by SavantaComRes.

‘Opposition for the sake of it’

Author Andrew Lownie has spent four years and £250,000 fighting for the release of Lord Mountbatten’s diaries, after his attempts were blocked by Southampton University, which owns the archive, and the Cabinet Office. Lownie said the government seemed to have a policy of opposing transparency.

“If the government directed the money they spend on frustrating FOI requests on actually assessing and releasing material then there might be greater confidence in FOI,” he told openDemocracy.

“The policy seems to be opposition for the sake of it, even on files which pose no threat to security or data protection.

“The Cabinet Office and Southampton University have consistently refused to say how much they have spent on my fight to see the Mountbatten diaries and letters, beyond Southampton admitting to £33,000 just on a QC for the case management hearings.

The policy seems to be opposition for the sake of it, even on files which pose no threat to security

“Given I’ve spent £250,000 on subsidised rates with a young barrister and they have deployed very expensive QCs in a double defence, it probably runs to double that – all for material which should never have been closed in the first place and is innocuous. Might that money not be better spent on the NHS?”

The government said it was “committed to being open and transparent”, but needed to “balance the need of making information available with our duty to protect sensitive information”.

A spokesperson said: “Just like any other public authority, under the FOI Act the government has a right to appeal ICO rulings and set out our position when we feel there is a need to protect particularly sensitive information, including related to national security and personal data.

“We routinely disclose information beyond our obligations under the FOI Act, and are releasing more proactive publications than ever before.”