Covid infections across Devon have fallen in the latest seven-day period, but  the numbers don’t yet reflect the surge in Omicron cases hitting the nation.

The latest weekly statistics run to Sunday, 12 December.  On that single day alone, the UK  recorded 50,149 cases. By Friday, 17 December that number had nearly doubled to 93,045, the highest daily figure since the start of the pandemic.

Nevertheless, before Omicron took hold, infections in Devon dropped. Now the new weekly figures to 12 December show 7,591 new cases, 1,412 (16 per cent) fewer than the previous week. On that day, the county’s infection rate was 662 per 100,000 of the population, still higher than the national average of 536.

Cases fell in every council area in Devon apart from Plymouth, where infections rose three per cent. The 2,206 new cases in the city was 56 (3 per cent) more than the previous week. During this period, Plymouth had an infection rate of 839 per 100,000 of the population.

The Devon County Council area, which excludes Plymouth and Torbay, saw cases drop 22 per cent, with 1,331 fewer. The rate of infection across ts seven districts stood at 567 per 100,000.

After having the highest rates of infection of anywhere in the country in late November, Torridge welcomed a drop in cases for the second consecutive week. The number of people contracting covid was down a third (36 per cent), with 408 new infections, down from 226 the week before, and a rate of 594 per 100,000. 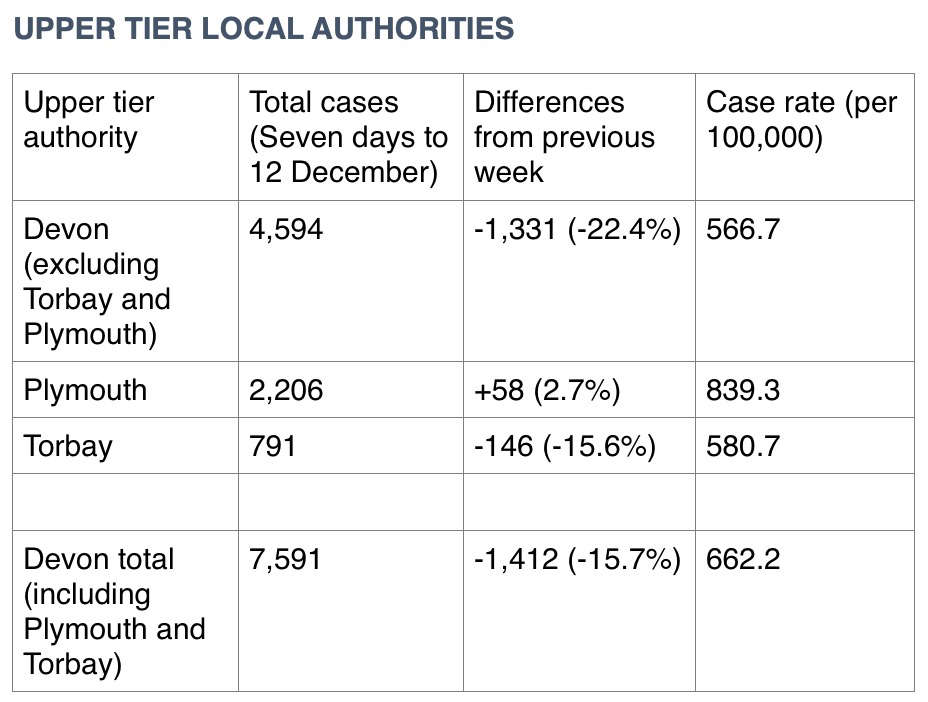 The most recent data (from Tuesday, 7 December) shows 160 patients in Devon’s hospitals with covid, an increase of 12 from the previous week.

Sixty-nine are at Derriford Hospital in Plymouth, 36 at the RD&E, 30 in Torbay, 22 in North Devon and three at Devon Partnership mental health sites.

Of the total number of patients, 16 are in ventilation beds.

Seventeen people died within 28 days of receiving a positive covid test across Devon in the most recent complete seven-day period (up to Sunday, 12 December) – six more than in the previous week.

Ten people died in the Devon County Council area, which excludes Plymouth and Torbay. Six deaths were recorded in Plymouth. One death was  in Torbay.

Across Devon, a total of 1,389 people have now died within 28 days of a positive covid test.

Eighty-seven per cent of people aged 12 and above have had their first dose of a vaccine in the Devon County Council area, excluding Plymouth and Torbay, with 81 per cent receiving both doses. Forty-nine per cent have now had their ‘booster’ dose.

On Friday,  17 December, promising early research was shared which suggests that booster vaccines could be 85 per cent effective in preventing severe illness from the Omicron variant.

The modelling, from Imperial College London, is based on limited information on Omicron.

The researchers say there is a high degree of uncertainty until more real-world information is gathered.

“Whilst it may take several weeks to fully understand this, governments will need to put in place plans now to mitigate any potential impact.

“Our results demonstrate the importance of delivering booster doses as part of the wider public health response.”

Dr Clive Dix, former chair of the UK Vaccine Taskforce, said: “There is a huge amount of uncertainty in these modelled estimates and we can only be confident about the impact of boosters against Omicron when we have another month of real-world data on hospitalisation, ICU [intensive care] numbers and deaths.

“It remains the case that we still need to get vaccines current and future to the whole world.”