Suella Braverman’s dubious claim she “contributed” to a legal textbook when working as a lawyer is being assessed by the barristers’ regulator.

The home secretary claimed in an online CV to have been “a contributor” to a regulatory book published titled Gambling for Local Authorities, Licensing, Planning and Regeneration by Philip Kolvin KC.

But Kolvin told The Big Issue in October she made “no written or editorial contribution”, adding: “However on one occasion I asked her to do some photocopying for the book, which she did.”

It has now emerged the story sparked a complaint of “potential serious misconduct” from a fellow barrister to the Bar Standards Board, which regulates barristers and investigates wrongdoing.

The complaint, first reported by Private Eye and seen by The Big Issue, was made in early October and accused Braverman of a “dishonest statement made out of self interest to promote her career”.

It reads: “The ‘Big Issue’ has recently reported that in her profile on the Website of Number 5 Chambers, removed apparently at short notice on 30 September 2022, Ms Braverman claimed to have contributed to a textbook Gambling for Local Authorities: Licensing, Planning and Regeneration (Institute of Licensing, 2010) edited and primarily written by Philip Kovin KC.

“He says she did no more than do some photocopying for him and ‘did not make a written or editorial contribution to the book.’ If true, that would seem to be a dishonest statement made out of self interest to promote her career.”

Profiles on the No5 website outline barristers’ accomplishments and are submitted by the individuals concerned. Many are self employed, with the chambers the rooms they use while working.

No5 declined to comment on the record, but the entire contents of Braverman’s profile was removed from the website after The Big Issue approached her office for comment. Staff at the chambers said she asked them to remove the profile after the Big Issue made contact about the claim. A copy of the web page is still available online through the Internet Archive. 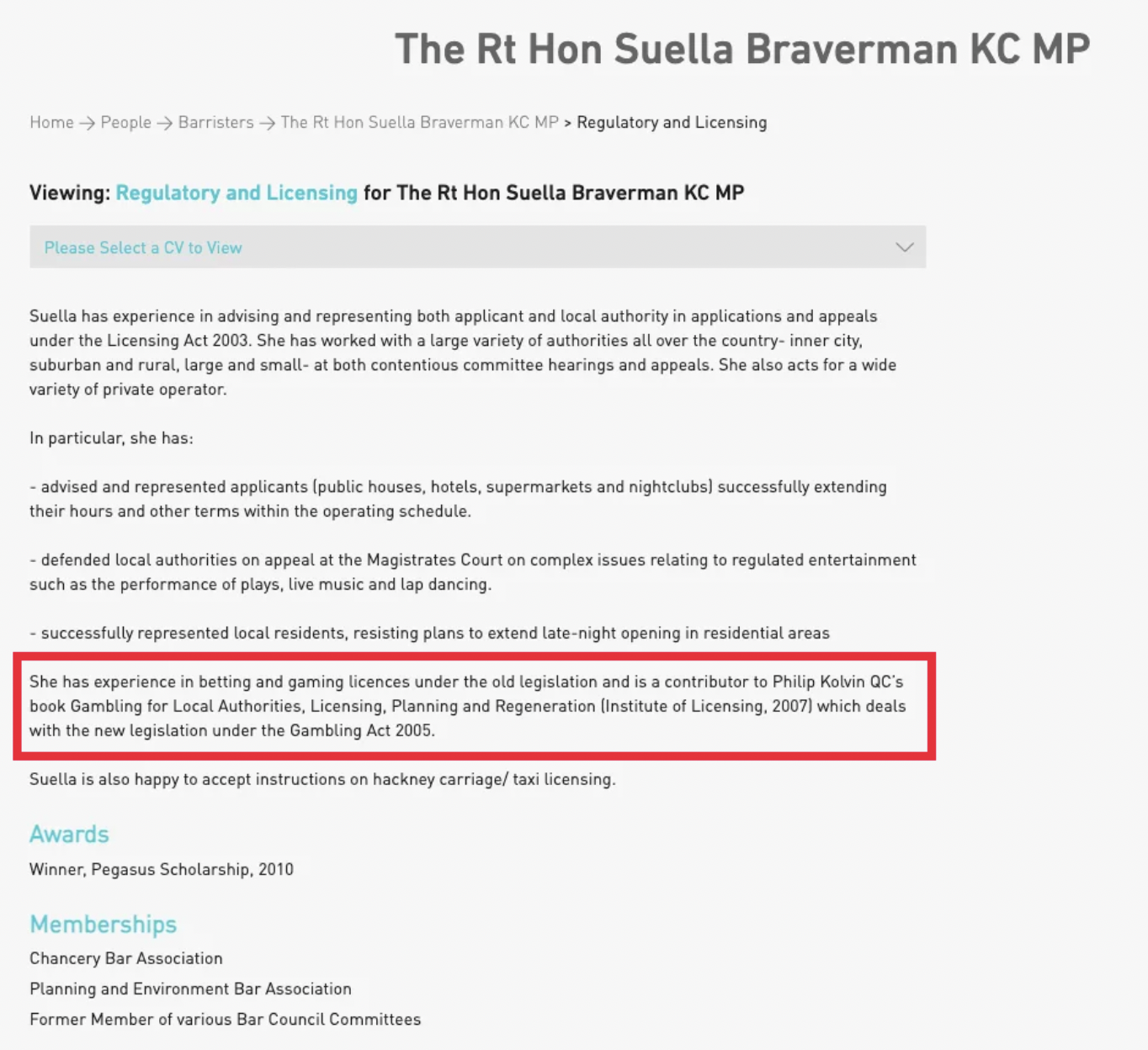 Braverman’s regulatory and licensing profile on the No5 chambers website. Image: Screenshot

In a response to the complaint seen by The Big Issue, the BSB says reports of “a concern” will be assessed “as quickly as possible”, whereas reports of “serious misconduct” may take longer.

If the BSB decides to investigate, this could lead to a tribunal which, at most, could see the home secretary being banned from being a barrister.

Other punishments include a fine. However, the board could also decide to take no action or send an informal letter.

The decision whether to investigate takes up to eight weeks, while an investigation itself would take about six months.

Barristers reporting other barristers are under a duty to only do so if they have a “genuinely and reasonably held belief” that serious misconduct has taken place.

The Bar Standards Board said: “The BSB is unable to comment on any ongoing investigations as these are confidential.

“Full details on how we assess reported concerns about barristers are available on our website. Should such an investigation result in a decision by a Disciplinary Tribunal, this would be published on the BTAS website in due course.”

Braverman’s office did not respond to a request for comment.