Can you imagine saying you will vote against questioning NHS Property Services about their intentions on the future of community hospitals which they now own “because they might not come”! And Randall-Johnson saying she is “not aware of any threat to any community hospital!!!

[CCGs have been offered match funding from the government for any properties sold in their areas]
http://www.mirror.co.uk/news/politics/naylor-plan-outline-sell-nhs-10544577
http://www.property.nhs.uk/asset-management/ 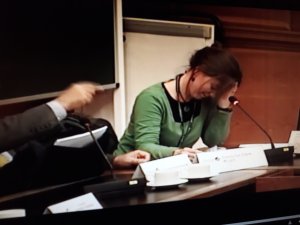 “NHS Property Services will be invited to attend the next Health and Adult Care Scrutiny Committee in January.

But my simple request prompted a debate lasting over half an hour, at Tuesday’s meeting (21 November).

The lengthy and baffling discussion gave a poor impression of the committee in my view, with some Conservative councillors claiming confusion and dismissing the proposal several times as “premature.”

It all started off with a presentation to the committee by Independent councillor, Martin Shaw, under the final work plan agenda item.

Cllr Shaw rightly pointed out how many people were concerned about the potential loss of the hospital buildings, that they had put their own money into them and still there was no clarity over their future, yet NEW Devon CCG were (or at least would very soon be) paying large sums of money in rent each year when previously they owned the buildings outright.

NHS Property Services, a private company wholly owned by the Secretary of State for Health, set up under the Health and Social Care Act 2012, acquired the ownership of 12 community hospitals in Eastern Devon at the beginning of this year.

Given that the NEW Devon CCG is one of three most financially challenged health trusts in the country and must make huge cuts to try and stem a deficit of over £400m by 2020, people’s concerns about the future of the hospitals are very valid.

Following my proposal to invite NHS Property Services to the January meeting, chair, Sara Randall Johnson said there was a full agenda for the next meeting so it may not be possible to include it. She said that she was not aware that there was a threat to any community hospital.

Liberal Democrat, Brian Greenslade said NHS PS had been invited previously but questions had been remained unanswered and so should be invited again.

Conservative, Phil Twiss, who represents Honiton which has lost its own hospital beds, claimed in a number of long statements that it was “premature” to invite the company because the future of the buildings had not yet been decided.

He later added that they wouldn’t come anyway.

I replied that waiting until the March meeting was far too long and could mean that decisions were already made. Surely we need to talk to NHS PS and the CCG before their decisions?

I attempted to explain again why it was important we invited the company to the January meeting.

Conservative members became very fixated with the legacy issue, even though I had made it clear that it was about questioning NHS PS and the CCG about their plans on the future of community hospitals and the legacy issue was only part of that.

Chair, Sara Randall Johnson, suggested holding a meeting first to agree some questions to ask NHS PS. I have not seen this approach in my four and a half years as a member of the committee.

I had to make my proposal numerous times, while one or two persistent Conservative members continued to challenge it.

There was an amendment by Liberal Democrat, Nick Way, who wanted a spotlight review into the issue as well.

Phil Twiss then changed his tack and claimed there was no point in asking the company to attend as they wouldn’t come. He was in favour of a spotlight review instead (spotlight reviews are held in private).

But when the vote finally was taken, it was on the spotlight review amendment and not my original proposal to invite NHS PS to the next meeting …

I tried to intervene. Fortunately, the officers corrected matters… and then the majority of the committee voted in favour of my proposal. Finally.

My proposal couldn’t have been more straightforward or uncomplicated. It was entirely within the committee’s remit.

It was also within a couple of hours of hearing the county solicitor’s presentation about how scrutiny should do its job properly. Or be culpable. See this blogpost here – http://www.claire-wright.org/index.php/post/devon_county_council_solicitor_tells_health_scrutiny_committee_you_have_a_v

Here’s the webcast. It is the final item on the agenda – https://devoncc.public-i.tv/core/portal/webcast_interactive/302658

One thought on “DCC Health Scrutiny Committee – not fit for purpose”