“All Flybe jet flights are to end from Exeter Airport when its summer timetable finishes in October, airline bosses say.

The move, which is part of plans to cuts its fleet from 85 aircraft to between 70 and 75, will affect routes including Faro, Mallorca and Malaga.

The company apologised, blaming an industry-wide shortage of pilots for the delays, as well as its own pilots taking holidays.

She was speaking after the Exeter-based regional airline cancelled dozens of flights on Wednesday morning.”

Owl says: what the hell is happening? One minute we are told of new routes (including Flybe) and the next the talk is of all Flybe routes being cancelled! Would the airport (into which DCC and EDDC are pouring money into for infrastructure improvements) then be viable?

“Exeter-based airline Flybe has confirmed it is undertaking a ‘base restructuring’ after reports this morning that all jet-plane flights from Exeter, Cardiff and Doncaster are to be scrapped.

In a statement on the reason 27 Flybe flights were cancelled this morning the airline confirmed that ‘base restructuring’ is part of the reason.Pilots and cabin crews are believed to have been called into meetings since 4am this morning to be told the news, which has added to the delays.

According to UK Aviation News pilots have been told the decisions comes after a “critical review of the business performance”.

If true it means jet flights will cease operating from Exeter this summer, leaving the company to operate just Dash 8 Q400 planes – the type that makes shorter journeys such as Exeter to London.

Flybe this morning confirmed ‘base restructuring’ was under way, and said that is part of the reason a number of flights were cancelled on Wednesday.

UK Aviation News says the move could be ‘potentially devastating’ for Exeter Airport. …”

To Flybe or not to Flybe, that is the question

“Regional airline Flybe has cancelled dozens of flights on Wednesday morning for what it describes as “operational reasons”.

Five flights from Belfast City Airport and four from Birmingham are among those affected, along with departures from Southampton, Aberdeen, Edinburgh and Newcastle.

Most of the flights are within the UK.

The airline said it would like to “sincerely apologise for any inconvenience caused”….

… On Monday, Flybe passengers on a new route were left with a six-hour coach journey when their aircraft was grounded.

The 18:40 service from Newquay to Heathrow could not take off on Sunday because of a “technical issue”. 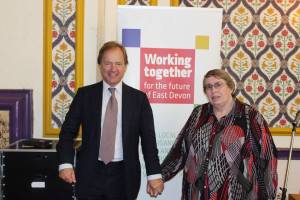 This is MP Hugo Swire with Jill Elson who has been a Tory councillor for FORTY years. She has been the Cabinet Member for Sustainable Homes and Communities at East Devon District Council and Chairman of Resources (Governor) of Exmouth Community College.

Sustainable homes? Communities? See this article from yesterday – you need 10 TIMES the average salary to buy a home in East Devon:

Governor responsible for resources at a college that is asking donations of £15 per first child and £5 per subsequent child to make end meet!

Owl rests its case for the need for change!