An accompanying video shows Johnson speaking these words. Obviously a guy with a BIG problem with women!

“Boris Johnson said female suffrage only happened because men realised women could “run them down” with cars, in a video which has resurfaced on social media.

Mr Johnson made the bizarre comment to Sir Drummond Bone in an interview for Voices From Oxford in 2013 after he was asked about his 2007 book on cars, Life in the Fast Lane.

“I think that women’s liberation – female suffrage – probably wouldn’t have happened, if it hadn’t been for the motorcar,” the prime minister, who was then-Mayor of London, said.

“Basically because men realised that women were at the wheel of a machine that could run them down.” …

… “They were so hostile to women on bicycles that they would hang bicycles from trees to indicate their displeasure that women were being able to use these liberating pieces of technology,” he added.

“But of course, when the combustion engine allowed women to travel at many miles an hour and to be in a position of command, I think the game was up.” 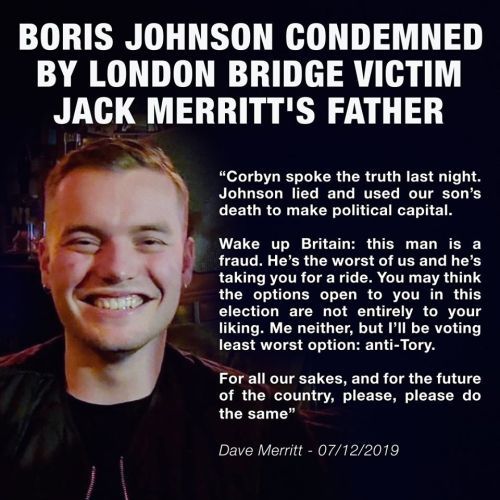 Johnson advocating NHS privatisation – in his own words

A Christmas Pantomime for 2019

From a correspondent (thank you!)

“Once upon a time in a land far, far away from the Palace of Westminster, there lived a woman of courage who was famous for her noble qualities and outstanding achievements.

She lived in the Shire of East Devon and worked tirelessly trying to improve the lives of the local inhabitants. She was admired by the folk of the Shire, who thought that she was the ‘Wright’ sort of person to fully understand their fears, hopes and dreams, having lived alongside them in their community for many years.

The townsfolk and villagers had long been ruled by local, affluent land-owning Barons, who had failed to consider their less prosperous neighbours’ viewpoints and beliefs. However, as the Barons continued to amass great wealth, many people in the Shire became poorer, some even having to resort to begging on the streets or visiting food banks to ensure their families were fed!

The wealthy Barons also encouraged voracious Development Dragons to roam the land, devouring the Shire’s green fields, ravaging the countryside and exhaling clouds of pollutants into the environment. However, the Dragons were tolerated by the Barons because these giant monsters agreed to leave sizeable pots of gold to the Barons in compensation for the destruction that had been caused by their huge appetites and consequently the pots of gold allowed the Barons to grow even richer and fatter!

The Palace of Westminster feared all challenges from the Shires and so the Sheriff sent forth a ‘last minute’ Champion on the very long, arduous journey from Westminster to East Devon to do battle to ‘Juppardise’ any chances of independence for the Shire.

It was proposed that a Jousting Tournament should take place on Thursday 12th December 2019 from dawn to dusk, with the overall winner gaining control of the Shire. The Palace was able to supply big-budget lances for the Joust and such an arsenal may prove difficult to overcome and the odds seem stacked against the diminutive figure of the Shire’s heroine.

However Goliaths can be toppled and she has always been able to rely on support from numerous Magical Otters with phenomenal powers beyond belief and they all intend standing shoulder to shoulder with her in this special battle. As the time for the Jousting Tournament approaches there are very large numbers of Shire folk preparing to make the journey to support her in their droves.

Will there be ‘A Happily Ever After’ ending to this Fairytale?

That part of the Story is yet to be written. …”

Where Jupp goes Johnson follows as he refuses to attend his own constituency’s hustings!

A VOTE FOR ANYONE OTHER THAN CLAIRE WRIGHT IS A VOTE FOR JUPP AND JOHNSON.

Japp and Johnson – total non-believers in the democratic process.

“Organisers had initially rearranged to accommodate the Conservative candidate after the event clashed with Mr Johnson’s debate with Jeremy Corbyn on the BBC, but the PM declined nonetheless.

Labour candidate Ali Milani, who did attend the debate, wrote on Facebook afterwards: “Local hustings are a pillar of local democracy. Every local resident should have the right to ask all their candidates questions and hear their views. …”

“Falling asleep in front of Question Time the week before last I was jolted awake by a question I’d given up writing in my notebook. “Why,” a woman in the audience asked the panel of politicians and commentators, “do you lie all the time? Wouldn’t it be better if you just told us the truth?”

Reporting from Lancashire, Yorkshire and Teesside earlier in the campaign, I’d come across this plea and its close cousins many times over. “You can’t trust any of them.” “They’re all the same.” “They’re all in it for themselves.” “It doesn’t matter who you vote for, or if you vote at all, it doesn’t make any difference.” “I don’t believe a word they say.”

And so forth. On the road, vox-popping the electorate, you soon learn that to secure any quotable opinions that express a preference for one party or another you first have to wade through and discard all of the above remarks. This doesn’t only apply in the north. My colleagues Patrick Kidd (southwest), Hugo Rifkind (Scotland) and Damian Whitworth (Midlands) tell a similar story.

And that’s not counting the voters — or non-voters — who say they are too busy or cold or “bored of the whole thing” to stop and talk. Or the guy in Batley who politely explained that he didn’t vote “because I’m a member of the occult”. Or the well-spoken woman in Oldham who offered the excuse: “I’m sorry, sweet, I just know f*** all about any of it.” Or the 79-year-old chap in Accrington who didn’t have much to say about matters political but was keen to show me his tobacco tin with “I Love Pussy” emblazoned on the lid. He also had “Pure Evil” tattooed across his knuckles. A 79-year-old! It truly is a funny old place, Britain.”

“Families have been hit by a huge rise in local “stealth” taxes over the past decade as councils introduce garden and bulky waste removal charges and raise the cost of funeral services, pest control and even public lavatories.

Analysis by The Times of council accounts shows that revenue from environmental, regulatory and planning charges has increased by almost 50 per cent to £2.3 billion since 2009.

Last year, revenue from these charges increased by more than two and a half times the rate of inflation as councils scrambled to raise cash after ten years of austerity. This means every home in England is now paying an average of more than £100 a year in council charges on top of their average council tax bill of £1,671.”

“I am the only candidate who can win this seat from the Conservatives”, Claire Wright tells packed hall at Sidmouth hustings

The popular Independent candidate’s opening statement of this obvious fact was greeted with warm applause tonight by the large audience who attended the hustings at All Saints Church Hall, organised by the Vision Group for Sidmouth.

The Tory candidate, Simon Jupp, had agreed to be there, but withdrew at the last minute, citing an alternative commitment to appearances at late-night shopping events at Sidmouth and Budleigh Salterton that evening. Mr Jupp’s agent’s letter, courteously read out by Vision Group’s Peter Murphy,who Chaired the meeting, prompted loud guffaws from the floor.

All candidates acquitted themselves well, but a vote for any except Claire Wright would simply play into Boris Johnson’s hands. Only Claire Wright, with her decade of dedicated service as first a District, and now a County Councillor, could claim to have the “knowledge, experience, and contacts on the ground” to seriously challenge the Tory hold in East Devon.