Photos of No 10 “Gathering” confirmed

Boris Johnson took part in a Christmas quiz sitting between two colleagues in No 10 last year – while indoor household mixing was banned in London. 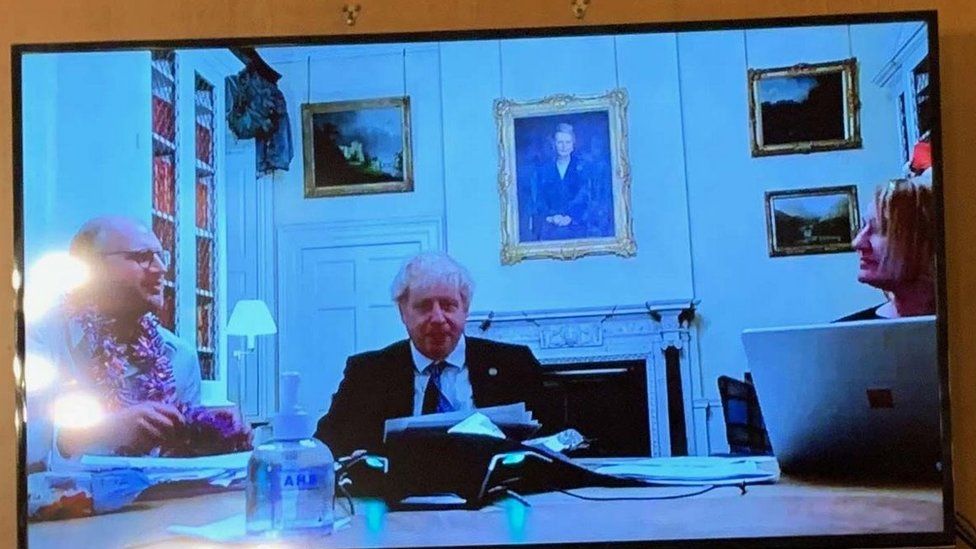 The Sunday Mirror has published a picture of Mr Johnson at the event, which it said was on 15 December.

Downing Street said the prime minister “briefly took part virtually in a quiz” to thank staff for their hard work during the pandemic.

It comes after the government launched an investigation into three allegations of gatherings last Christmas – including two in Downing Street – despite Covid rules banning them.

In the photo, Mr Johnson is sitting in the No 10 library between a colleague wearing a tinsel scarf and another apparently in a Santa hat.

London was under Tier Two restrictions at the time, which banned mixing of households indoors – apart from support bubbles – and allowed a maximum of six people to meet outside.

Official guidance said: “Although there are exemptions for work purposes, you must not have a work Christmas lunch or party, where that is a primarily social activity and is not otherwise permitted by the rules in your tier.”

Responding to the photo, a No10 spokesperson said: “This was a virtual quiz. Downing Street staff were often required to be in the office to work on the pandemic response so those who were in the office for work may have attended virtually from their desks.”

A Downing Street source told the BBC the two people in the picture with Mr Johnson were members of his closer staff who had come in to help him with the technology.

But Labour’s deputy leader Ms Rayner said: “Boris Johnson really believes it’s one rule for him, another for everyone else.

“Despite repeated denials of parties in No 10, it now transpires that there were numerous parties, gatherings and the prime minister even took part in a festive quiz,” she said.

The Department for Work and Pensions has confirmed some of its staff drank alcohol and ate takeaways “late into the evening” on several occasions while Covid restrictions were in place.

On Friday 10 Downing Street cancelled its 2021 Christmas party amid growing anger over a different gathering on 18 December last year, after London had been put under Tier 3 restrictions banning gatherings of two or more people indoors unless it was “reasonably necessary” for work.

After criticism from opposition parties, the media and his own MPs, the prime minister asked Cabinet Secretary Simon Case to carry out an investigation into the 18 December party earlier this week.

The inquiry will also include finding out what happened at another Downing Street gathering on 27 November last year, and another at the Department for Education on 10 December.

Allegra Stratton quit her post as a government spokesperson on Wednesday after a backlash over a video she appeared in from last December, in which she joked about a Christmas party.

The row over Christmas parties continued to escalate as the government announced new rules in England to tackle the spread of Omicron.

Mr Johnson faces a rebellion from about 60 Conservative MPs when the measures are put to a vote in the Commons next week.

Government sources suggested the introduction of Plan B measures for England will be divided into three separate votes on Tuesday, including one on Covid passes which are opposed by some Tories.

But the measures are expected to become law as Labour is backing the government.

On Saturday, a further 633 Omicron cases were reported – although the real number is estimated to be much higher. Overall, a further 54,073 daily cases were recorded across the UK.

Meanwhile, a report by the London School of Hygiene and Tropical Medicine has suggested the UK will face a substantial wave of Omicron infections in January without further restrictions, beyond Plan B.