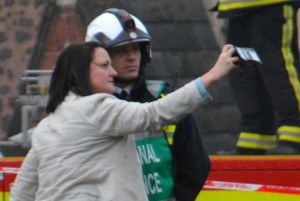 A Tory crime tsar has provoked anger by taking a selfie with a fire chief in front of the blaze that has destroyed England’s oldest hotel.
Alison Hernandez was photographed posing with Lee Howell, the Chief Fire Officer for Devon & Somerset Fire & Rescue Service, as the ancient Royal Clarence Hotel in Exeter burned behind them.

Mr Howell, who is seen in full protective gear in the picture, was in charge of fighting the blaze which broke out on Friday and was finally contained yesterday.

The Royal Clarence, which dates back to 1769, was devastated by the fire.

As Police and Crime Commissioner for Devon & Cornwall, Mrs Hernandez has no responsibility for live operations so had no need to be at the scene of the blaze, which also destroyed an art gallery and threatened other historic buildings near Exeter Cathedral.

Exeter MP Ben Bradshaw said: ‘I’m not sure this is appropriate behaviour for our Police and Crime Commissioner.

‘Taking selfies with senior fire officers during such a tragedy when they may have more important things to do is not in the best of taste. ‘I’m sure Mrs Hernandez will reflect on this and apologise.’

Her actions were branded ‘utterly contemptible’ in a Twitter post by the former mayor of nearby Dawlish, Howard Almond. Other Twitter users accused her of ‘rubbernecking’.

Mrs Hernandez did not post her photograph on social media but did upload two pictures of workers at the scene, writing that some had been on duty for 12 hours.

She said she had gone down to the scene of the fire in Exeter’s Cathedral Green to give thanks to the emergency services.

She added: ‘It is an extremely sad day for Exeter, so this is not an appropriate time to respond to Mr Bradshaw’s comments.’

Mrs Hernandez, who is paid £85,000 a year, has been under investigation since she took up her role in May over claims that she failed to declare expenses fully as a Conservative agent at last year’s General Election.
Her force’s Chief Constable, Shaun Sawyer, is now also under investigation over comments he made about her case in a radio interview.”