“PM among cabinet members earning money as a landlord”

“Nine cabinet ministers, including the prime minister, are making more than £10,000 a year by acting as landlords, a Guardian analysis has found.

Following Jeremy Hunt’s failure to declare the purchase of seven luxury flats that he subsequently rented out, an analysis of the parliamentary register of MPs’ interests shows eight other members of the cabinet own and rent out a property.

The health secretary was forced in to an embarrassing apology on Friday after it emerged that he had failed to declare a business interest with both Companies House and the parliamentary register of MPs’ interests.

Hunt has amended the register, which now shows that he has a half share of a holiday home in Italy, a half share in an office building in Hammersmith and seven recently acquired apartments in Southampton.

Theresa May and Philip Hammond, who both live in Downing Street, rent out their personal homes in central London. Communities and housing secretary Sajid Javid also rents out property, while Chris Grayling, the transport secretary, rents out two properties, according to the register

The foreign secretary Boris Johnson, the international trade secretary Liam Fox, the minister without portfolio Brandon Lewis – who is also the Conservative party chairman – and the Welsh minister Alun Cairns also own and rent out a property, according to the register. 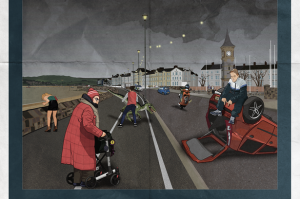 “Civic Voice president Griff Rhys Jones has today added his voice to campaigns by six community groups fighting “garden communities” being imposed on them by the Government.

He has penned a powerful Foreword to a Smart Growth UK report mostly written by community groups around the country who are opposing garden towns and villages. Griff warns that, far from being utopias, these are disordered schemes that ignore local communities and would be located in unsustainable locations.

“We encounter proposals that are not going to answer local needs for housing at all, but will waste precious countryside by building low density sprawling estates and creating expensive houses. Brownfield land in England can accommodate one million houses, So get on with it and use that.” he says.

Griff warns that terms like “housing crisis” and “emergency” are being used to force through development of the countryside which fails to provide the affordable homes we need as a nation.

““Planning” by definition means looking to the future. That must mean the long-term future as well as the next few years. We need to recognize that people who urge care, caution and attention are not dwelling in the past. They are not NIMBYS, says Griff. “They are protecting the future.”

He says the protests, assessments and legitimate concerns in the report make sober reading.”

“A group of 20 NHS hospital trusts has launched a legal challenge for business rates relief. The trusts have started legal proceedings against 49 local authorities who want to be treated the same as private hospitals for relief on business rates bills. A preliminary hearing took place yesterday. The LGA is supporting councils involved in the case. …”

The scandal of hospital “ghost wards”

“Hospitals are mothballing scores of wards, closing them to patients despite the NHS’s ongoing beds crisis, new figures reveal.

At the last count in September 82 “ghost wards” were recorded containing 1,429 empty beds, the equivalent of two entire hospitals, according to data provided by hospital trusts across England. It represents a sharp increase on the 32 wards and 502 beds that were unused four years earlier, statistics obtained under freedom of information laws show.

The closures, often a result of hospitals not having enough staff or the money to keep wards open, have occurred at a time when the health service is under unprecedented pressure and struggling to cope with demand for beds.

Doctors’ leaders reacted with disbelief to the revelations, which come after the NHS endured its toughest winter for many years, during which many hospitals ran out of beds.

“Given the pressures on the whole system, which suggest the NHS is 5,000 beds short of what it needed this winter, [this situation] is amazing and is almost always caused by not having enough money or staff,” said Dr Nick Scriven, the president of the Society for Acute Medicine. …”