For each destination, ratings were given for the beach, food and drink, value for money and peace and quiet, among other things, with scores added up and given out of 100.

Owl thinks Beer better be on stand-by for the invasion! (Which? said those wanting to avoid holiday hotspots could consider some of the highly rated destinations on its list which were less well known.)

A sedate fishing village on the tip of a Cornish peninsula has been ranked as the UK’s best coastal destination, beating other better-known seaside resorts to the crown.

St Mawes, which sits on the banks of the Fal estuary and boasts a Tudor castle in the shape of a clover leaf, topped a poll of more than 4,000 readers of Which?, who were asked about their experiences of seaside holidays in the UK.

For each destination, ratings were given for the beach, food and drink, value for money and peace and quiet, among other things, with scores added up and given out of 100. 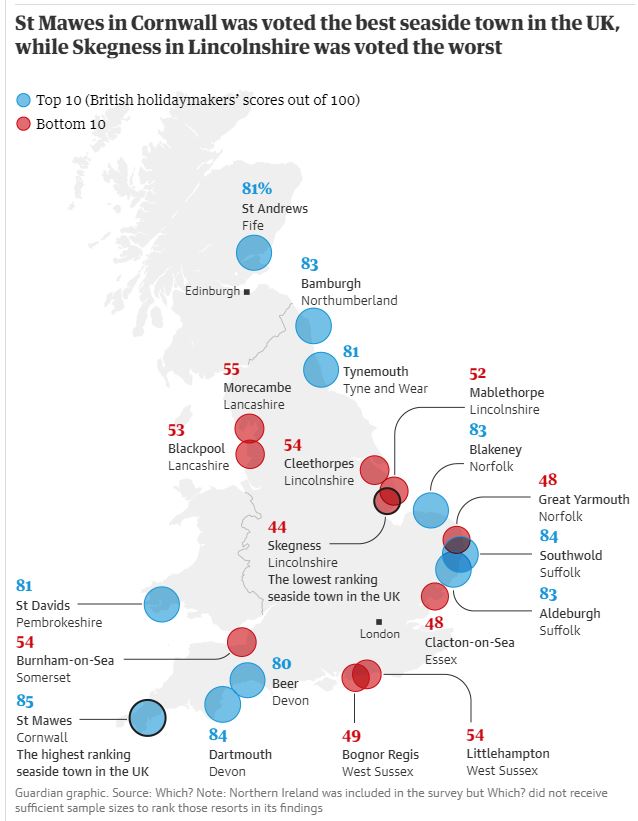 Those who had visited the Cornish village gave it a score of 85%, recommending the crab baguettes and opportunities for dolphin-spotting from the ferry to Falmouth.

The poll, which was carried out before the coronavirus pandemic, put Dartmouth in south Devon in second spot, with 84% of possible points, followed by the chichi Suffolk resorts of Southwold and Aldeburgh.

The list was unveiled as holiday destinations in England started to gear up for the summer holidays and an expected influx of visitors, with many people rejecting overseas travel in favour of trips closer to home.

Although they might be appealing to families looking for activities and the opportunity for sandcastle building, some more traditional holiday resorts were at the bottom of the Which? readers’ rankings.

Skegness, home of the original Butlins, scored just 44% from visitors, getting three stars for its award-winning beach but just one star for value for money, scenery and attractions.

However, one visitor told Which?: “Don’t be put off by the stereotypical opinions of Skegness. It’s a well maintained, vibrant area.”

Great Yarmouth in Norfolk and Clacton-on-Sea were also in the bottom five.

Which? said those wanting to avoid holiday hotspots could consider some of the highly rated destinations on its list which were less well known.

For example in Wales, where self-contained holiday lets recently reopened and campsites will be up and running from 25 July, instead of heading to Llandudno and Conwy, Which? recommends Criccieth. The town, which got a score of 74%, claims to be “the pearl of Wales on the shores of Snowdonia”.

Rory Boland, the Which? travel editor, said: “It is a good time to explore parts of the country you may not have considered before and to spread our sandcastles beyond the beaches of Devon and Cornwall. As our survey shows, it’s smaller seaside towns and villages with fewer visitors that holidaymakers love.”