‘What am I supposed to make with this!’ Parents on schools’ meagre food parcels

The government and the catering companies it has hired have come under fire after photographs of free school meal parcels were circulated online.

The food packages sent to children who qualify for free school meals and are remote learning because of the national lockdown were not considered to contain enough high quality food. The Department for Education said it was looking into the issue, and that “parcels should be nutritious and contain a varied range of food”.

Four families who are eligible for food parcels shared their response.

‘It makes things so difficult’

Mother of three, Karen Phillips, 33, has been forced to spend her rent money on her children’s lunches after receiving a “disgraceful” food parcel from her school last week.

The parcel, intended to last her 12-year-old daughter all week, didn’t contain any carbohydrates except two potatoes, alongside one onion, two peppers, a satsuma, single tomato and carrot, and two eggs wrapped in cling film. The parcel also included one small tub of soup powder, the same sized tub of tuna mayo, and a small bag of grated cheese.

“I phoned the school straight away and said, ‘what am I supposed to make with this?’ They said they had complained to their suppliers, and were going to start doing food vouchers instead, but they haven’t told us when they’ll be getting them. There were no instructions about what I could make with the food, and the school had no idea,” said Phillips, who lives in Berkshire as a full-time parent.

“I’d like to know how the catering company are getting away with it,” she added.

Her two children at primary school have not yet been offered anything.

“I told the teacher that I was going to use my rent money to pay for her daughters’ school dinners but the teacher said she couldn’t help,” she said. “It makes things so difficult. With homeschooling children as well, you don’t need the added stress of wondering if you can feed your kids.”

‘Where does the money go if this is what they’re giving people?’

The food parcel given to Sarah included two packs of bagels with best before labels of 3 April 2020 and 31 August 2020. Photograph: Sarah/Guardian Community

Sarah, a 36-year-old single mother in Birmingham, said she thought her parcel was “a bit of an insult” when it was delivered from her daughter’s secondary school this week. The package didn’t contain any fresh food except two potatoes. It also included bagels which, while they were frozen, were nine months out of date.

With the parcels supposedly costing £15 (for one child) from the government, Sarah said she could not understand where the extra money had gone.

“I know it’s free, and it does help, but they’re getting government funding to do this,” she said. “Where does the money go if this is what they’re giving people? It’s a bit disappointing.”

For her three children in high school, Caroline McMullen, 42, received “a small loaf of bread, apple juice, one apple each, a bag with a handful of pasta each, three small bags of raisins, cheese slices, a tub of butter and three tins of beans”, which was supposed to last for 10 days. Other than three apples, there wasn’t any fresh fruit or vegetables included.

“I’ve seen parents giving negative reviews of their parcels on Twitter, but I think, at least you’ve got a tomato. I didn’t get a single one,” said McMullen, who lives in Blackpool.

“Because of Covid, I’m trying to force as much fruit and veg down the kids’ mouths as possible, to keep their immune systems up. To give them pasta and raisins, it’s disgusting.”

McMullen said the food would not go far enough to keep her children fed for the 10-day period.

“It’s totally shocking,” she said. “I have a 14-year-old lad that eats me out of house and home. How do I tell him he’s only got an apple? It’s not even a bag of pasta, it’s a handful in a bag.”

She is also concerned that the school is not able to deliver the parcels. After the school confirmed another case of coronavirus on Tuesday morning, she said she was worried about having to travel into the school to collect food.

“What’s the point in keeping the kids off school if I have to go in? I feel like I have to choose between letting them starve or risk getting infection,” she said.

‘When you’re given food you can’t eat, it’s a waste’

Other parents were concerned that the limited supplies and lack of choice in the parcels would mean that children with dietary requirements could not benefit.

In Reading, one of Sharon’s* three children has Prader-Willi syndrome, a medical condition that means his diet is heavily restricted.

“It’s totally pointless me accepting the food parcel of potatoes and Soreen snacks, pasta and beans, when he is unable to eat any of it due to his dietary requirements,” she said.

Sharon is yet to receive her parcel but has emailed her son’s school to see if they can adapt it for her son’s needs. For families like hers, Sharon said, the voucher system was much more effective, as well as being better value for money.

“At least with the voucher I am able to buy food he is actually allowed to eat,” she said. “When you’re given food you can’t eat, it’s a waste. It should be more of a blanket policy. The vouchers are much easier, they allow you to utilise the scheme for your family.”

* Name has been changed

And from Roadside Mum BBC news 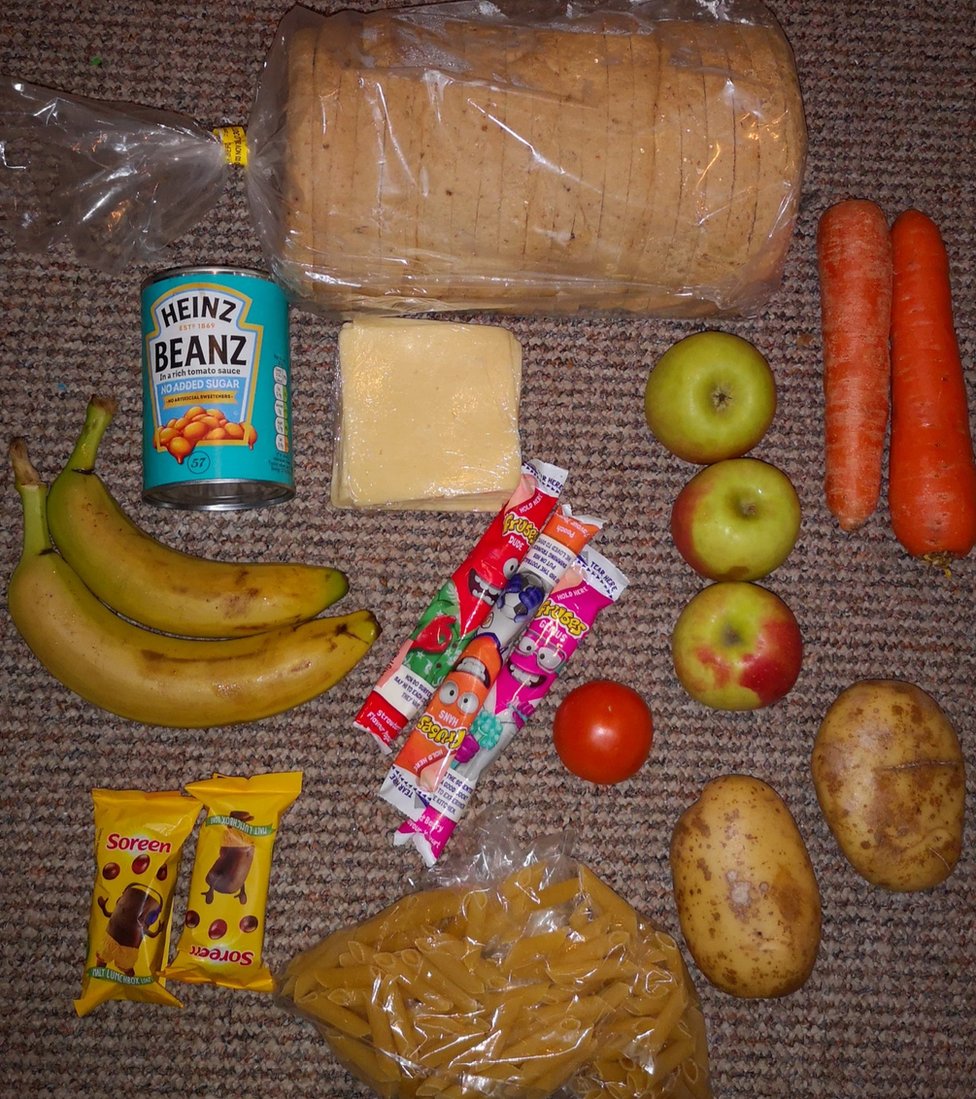 “Public funds were charged £30. I’d have bought this for £5.22,” said Twitter user Roadside Mum of the parcel she received