An introduction to brownfield: the land that’s ripe for recycling – CPRE

All you need to know about brownfield sites – Owl

At CPRE you’ll hear us talk about brownfield a lot; but what do we mean when we talk about this – and why do we think this often-neglected land matters so much?

Heard the term brownfield and wondered what it means, and what all the fuss is about? Here’s our potted guide to everything you need to know about brownfield land, and why it can form an essential part of future developments across the country.

What is this brownfield stuff, and why should I care?

Brownfield land is defined, in England at least, as ‘previously developed land that’s no longer being used’. Picture a disused industrial estate or an abandoned excavation site – it’s land that has previously had stuff built on it or that has been altered by human activity (but not including farmland). The term is used slightly differently around the world but has broadly the same meaning wherever you go.

‘It’s land that has previously had stuff built on it or that has been altered by human activity.’

Brownfield matters because it holds potential space for a huge amount of housing. Building on brownfield land directly reduces the amount of countryside that’s lost to development, meaning more green spaces and more space for nature to thrive.

Regenerating and renovating brownfield land can breathe new life into areas most in need. It’s the building equivalent of recycling – it’s better to use land that’s lying idle than to unnecessarily concrete over pristine countryside. Naturally, it’s not quite as cut and dried as this – more on that later – but at CPRE, we’re big fans of the principle of using recycled land, as you can imagine.

‘At CPRE, we’re big fans of the principle of using recycled land.’

Globally speaking, England is a relatively small country and land can be at a premium. We’re also becoming ever-increasingly aware of the indisputable importance of the countryside, not only for our physical and mental wellbeing but for nature, biodiversity and the climate. So, logically, it’s more vital than ever that we use land wisely, prioritising brownfield and protecting greenfield.

Is brownfield actually brown? And what’s greenfield, you ask?

Okay, maybe you didn’t ask. In contrast to brownfield land being essentially defined as ‘previously developed land’, it follows that greenfield land is defined as ‘land that’s not yet been built on’ – the idea being that a pristine, untouched field will be a vibrant green whilst land that’s been developed on may look a bit brown.

Of course, designating land into one of two categories – greenfield or brownfield – is arguably a touch simplistic, and, naturally, not all brownfield sites are suitable for being built on.

‘Despite not always being the most visually appealing, lots of brownfield sites harbour ecologically important habitats.’

This nomenclature also arguably does a bit of a disservice to brownfield, as by no means is all of it brown and run-down. Despite not always being the most visually appealing, lots of brownfield sites harbour ecologically important habitats, such as scrubby grassland, patchy pockets of water, and thistly weeds.

In fact, some sites are massively high in biodiversity, providing different ecological niches in which species, particularly invertebrates like bees, can thrive. 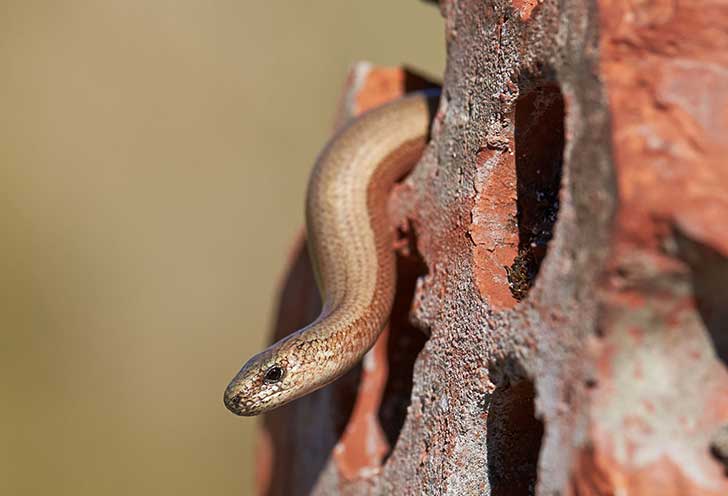 A slow worm, a legless lizard, emerging from a brick on a brownfield site | Tim Hunt / Alamy

For instance, Tata Steel in Scunthorpe provides habitats for species such as the hill cuckoo bee and snowberry. Sites like this must be protected for biodiversity to flourish.

‘Sites like this must be protected for biodiversity to flourish.’

Setting aside the areas with special ecological conditions, it’s generally better to build on brownfield land ahead of greenfield land (‘brownfield-first’). There can be big benefits to developing on brownfield land, such as the fact they’re often close to where people already live and work, as well as the additional benefits that we see from leaving greenfield sites alone to do what they do best.

As with everything, balance is key, and decisions need to be made on a case-by-case basis.

Brownfield land could provide an enormous number of homes – including the truly affordable homes that are so desperately needed – whilst allowing the countryside and nature to thrive. In fact, CPRE’s research shows that there’s capacity for well over a million homes on brownfield land – and that’s a conservative estimate.

‘CPRE’s research shows that there’s capacity for well over a million homes on brownfield land.’

It’s important not to conflate the argument of needing more housing with the argument for brownfield versus greenfield. At CPRE, we’re leading the call for an increase in affordable housing to allow for thriving rural communities.

Homes that people can actually afford and that work for people, nature, and the planet, are vital. So, whilst we have swathes of brownfield land available, why not use it?

Brownfield registers: on the hunt for hidden land

Brownfield registers were first introduced in 2017, following the findings of CPRE’s successful ‘Waste of Space’ campaign.

These registers require local planning authorities to provide a consistent, updated list of sites that they think are appropriate for development. The registers act as a ledger of land identified as being suitable for new housing once their environmental, amenity and heritage value have been factored in.

The introduction of these registers has given much more clarity and insight into the current state of the brownfield land that’s out there. Now we know the (huge) amount of land already available for building homes, a strong brownfield-first approach becomes even more sensible.

Why isn’t brownfield being used for new homes?

So… if brownfield land can provide space for over a million homes, why isn’t it being used? Well, this is where things get a bit more complicated.

Firstly, the identification and subsequent analysis of brownfield sites can be costly and complicated – although the registers help with this.

‘There really needs to be better funding from the government to make building on brownfield sites viable for developers.’

Secondly, there really needs to be better funding from the government to make building on brownfield sites viable for developers. There can be some extra costs attached to building on brownfield – such as cleaning the site, if it used to be a factory, for example – and at the moment it’s too tempting for housebuilders to avoid these sites and go for ‘easier’ greenfield options – or to try and pull back costs by only building more expensive houses on brownfield.

And we need to see more homes that are truly affordable. We mustn’t confuse regeneration with gentrification. Instead, we’ve seen cases of these high-priced, grander homes being built which, whilst some have their place, don’t do much to tackle the pressing shortage of affordable housing for people on low and medium incomes (that is, most people!). 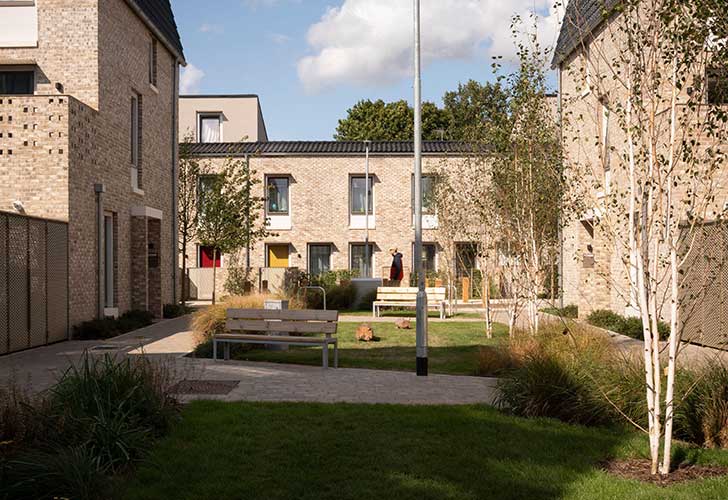 A view of the green courtyard of Goldsmith Street, Norwich, an environmentally-sensitive housing development built on a brownfield site | Jim Stephenson_VIEW / Alamy

At CPRE we strongly believe in the brownfield-first approach. For instance, Goldsmith Street in Norwich is a perfect example of how once-dormant brownfield land can be repurposed into providing high-quality housing, whilst still being respectful to nature and climate.

So what’s CPRE doing to promote the use of brownfield?

We’ve got a long history of campaigning on brownfield, and that’s not changing any time soon. We’re keeping our eagle eyes out to monitor the amount of brownfield land available in England – no mean feat. We’ll run a citizen science project with communities to identify brownfield land, too, which will help to increase the capacity in England. And we’ll keep pushing for a brownfield-first policy to be widely adopted.

‘Once home to much of the beating heart of the industrial revolution, the Midlands and the north have large amounts of industrial brownfield land.’

There are some areas where this makes extra sense. Once home to much of the beating heart of the industrial revolution, the Midlands and the north have large amounts of industrial brownfield land. We’re calling for changes to the funding for investment in housing to help regenerate these areas. Harnessing the brownfield here would be a huge bonus for areas of particular need of an extra boost.

Want to be a part of our work promoting recycling land? You can support us with a donation to keep us calling on the government to make brownfield-first the default, or become a member and connect with your local CPRE group to hear more about brownfield sites in your area.