All parts of Devon above covid average

Up for second week running 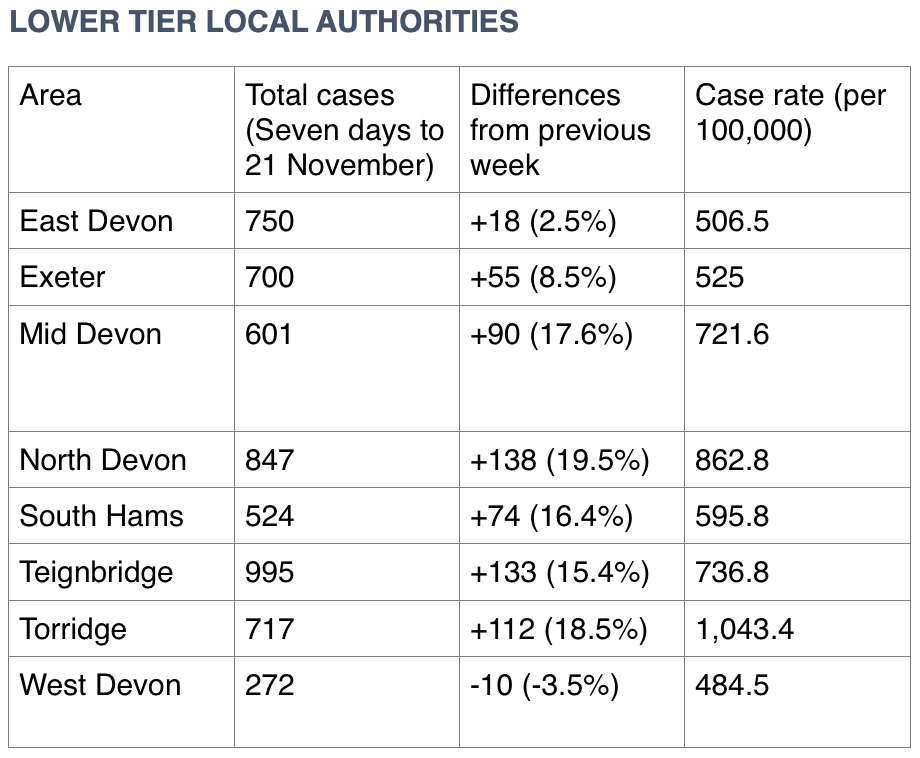 Covid infection rates across Devon have risen for the second week in a row, with all but one council area in the county reporting an increase in cases.

Levels are extremely high in parts of the county and every district has a higher infection rate than the UK average. The average infection rate across Devon is now 626 per 100,000 of the population. In comparison, the national average sits at 437.

The north of the county continues to see its already high case numbers grow. Last week cases in Torridge more than doubled to the highest infection rate in England. Numbers have risen again. In the last complete seven-day period, the district recorded 717 new cases, 112 (18.5 per cent) more than in last previous week. Torridge now has an infection rate of 1,043 per 100,000 of the population – almost two and a half times higher than the UK average.

Overall, the Devon County Council area, which excludes Plymouth and Torbay, saw 5,406 new infections, 610 (13 per cent) more than the previous week. The infection rate across its seven districts is now 667 per 100,000 of the population.

Torbay’s infections rose by four per cent, recording 842 new cases, 32 more than in the previous week. The rise takes the infection rate in the Bay to 618 per 100,000 of the population.

Speaking this week, Steve Brown, director of public health for Devon County Council, said part of the rise in cases was because the county had a lower “natural immunity” compared to other areas which experienced higher levels of infection earlier on in the pandemic.

He added: “We are also seeing cases really being driven by primary and secondary-aged children.

“We are not seeing those cases in those older more vulnerable people who might end up in hospital.

“I wouldn’t want to worry people but our rates are much higher than last year but with the vaccination programme we are not seeing the same impact which is the important measure to look at.”

Mr Brown also said that more people were getting tested in Devon compared to many other parts of the country, leading to more cases being identified.

As reported on Tuesday, the NHS in Devon has 168 patients in hospital with covid, up from 111 in early November.

It has not specified the numbers in each hospital. However available figures to Tuesday 16 November show that 40 per cent were in Plymouth, 34 per cent at Exeter, 15 per cent in Torbay and just over a tenth in North Devon.

Deaths have increased, with one more recorded than in the previous week.

Nineteen people died within 28 days of receiving a positive covid test across Devon in the most recent complete seven-day period (to Sunday, 21 November).

Across Devon, a total of 1,342 people have now died within 28 days of a positive covid test.

Eighty-seven per cent of people aged 12 and above have had their first dose of a vaccine in the Devon County Council area, which excludes Plymouth and Torbay, with 80 per cent receiving both doses.

This means that vaccination rates in Devon remain slightly behind the rest of the UK. Across the country, 89 per cent of people aged 12 and over have had one dose, while 80 per cent have had both jabs.

Distribution of infection across age groups: from the Devon Covid dashboard