Should have used the self deleting WhatsApp? – Owl

ITV News UK Editor Paul Brand reports on the email providing the first evidence of a party on May 20, 2020 in the Number 10 garden

Downing Street staff were invited to a drinks party in the Number 10 garden during the height of nationwide lockdown to “make the most of the lovely weather”.

An email shared exclusively with ITV News provides the first evidence of a party on May 20, 2020, when the rest of the country was banned from meeting more than one other person outdoors.

In it, Mr Reynolds – a senior No 10 civil servant who has run Boris Johnson‘s private office since October 2019 – says:

“After what has been an incredibly busy period we thought it would be nice to make the most of the lovely weather and have some socially distanced drinks in the No10 garden this evening.

“Please join us from 6pm and bring your own booze!”

ITV News understands around 40 staff gathered in the garden that evening, eating picnic food and drinking. Crucially, they included the Prime Minister and his wife Carrie Johnson. 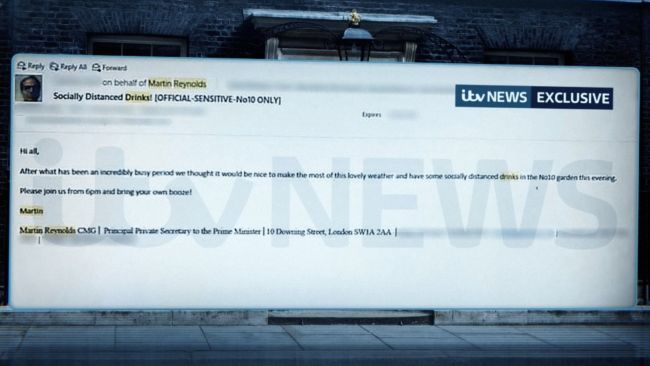 The May 20 party was first alluded to in a blog by the Prime Minister’s former advisor Dominic Cummings on Friday.

​The email follows allegations about staff gathering in the garden on a separate occasion on May 15, with a photograph emerging of Mr Johnson and his wife sitting with No 10 staff including Martin Reynolds on the terrace with a bottle of wine and cheese.

Downing Street has previously insisted that the photograph showed a work meeting. But the email about the drinks party on May 20 makes it clear that this was a social gathering, which is far harder to explain away.

Less than an hour before the drinks, the then Culture Secretary Oliver Dowden had reminded the rest of England at the daily press conference that they must only meet in pairs outdoors.

On May 20, 2020, then Culture Secretary Oliver Dowden told the public at a press briefing:

“You can meet one person outside of your household in an outdoor, public place provided that you stay two metres apart”

The latest revelations have led to fresh calls for the Prime Minister to be questioned as part of the internal inquiry into a series of parties in Downing Street, launched after ITV News aired footage of Number 10 staff laughing and joking about an event on December 19 2020.

In that video, the Prime Minister’s then spokesperson Allegra Stratton suggested that there had been “no social distancing” at the event, which staff jokingly referred to as a “business meeting” with “cheese and wine”.

ITV News later revealed that the Prime Minister’s Head of Communications, Jack Doyle, handed out awards to staff at the party and made a speech.

Since then, there have been allegations of multiple other parties.

The cabinet office inquiry into the allegations is currently being carried out by senior civil servant Sue Gray, who took over from the Cabinet Secretary Simon Case due to allegations that he knew of at least one party himself.

ITV News understands that the drinks party on May 20 will form part of the ongoing investigations, with the inquiry due to report back this month.

When Mr Johnson was asked on Monday if he and his wife attended the party on May 20, he replied: “All that, as you know, is the subject of a proper investigation by Sue Gray.”

Downing Street told ITV News they would not comment on the story due to the Sue Gray inquiry.