Devon covid up slightly this week

Covid rates have risen slightly across Devon, fuelled by a sharp rise in cases in Torbay.

In the latest complete seven day period (to Sunday 9 January) the county recorded 13,994 new cases, 191 (1.4 per cent) more than in the previous week.

There are small reasons for optimism. On Wednesday 11 January, 99,652 cases were recorded across the UK – the first time the daily infection number has been below 100,000 since 22 December last year.

The most recent data from Tuesday 4 January showed 174 patients in Devon’s hospitals with covid, an increase of over 50 from a week ago. More than half (92) are at Derriford Hospital in Plymouth.

Elsewhere, 37 are at the RD&E in Exeter, 28 in Torbay, 10 in North Devon and seven at Devon Partnership mental health trust sites. Of the total number of patients, 13 are in ventilation beds 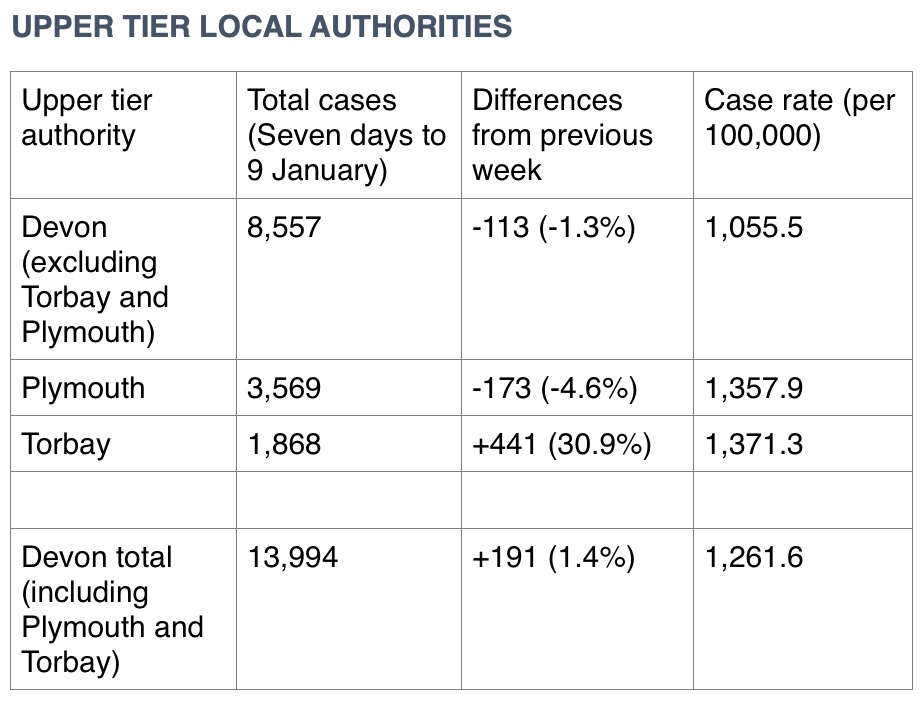 Fourteen people died within 28 days of receiving a positive covid test across Devon in the most recent complete seven-day period (to Sunday 9 January), down by four from the same time last month.

Eight people died in the Devon County Council area. Three deaths were recorded in Plymouth and in Torbay.

Across Devon, 1,486 people have now died within 28 days of a positive covid test since the pandemic began.

Eighty-eight per cent of people aged 12 and above have had their first dose of a vaccine in the Devon County Council area, with 83 per cent receiving both doses. Sixty-nine per cent have now had their booster.

Covid cases in East Devon by age group from “dashboard”

This includes data up to Jan 11