The deadline for registering to vote in the EU referendum has been extended, the government has said.

Cabinet Office minister Matt Hancock said the government would legislate to extend the cut-off until midnight on Thursday.

It follows a computer glitch which left some people unable to sign up before the original midnight Tuesday deadline.

The Electoral Commission urged people to sign up until the end of Thursday in order to vote on 23 June.

PLEASE do not leave it till the last-minute – do it NOW! With your national insurance number to hand (it is usually on payslips) it will take less than five minutes.

EVERY VOTE WILL COUNT IT IS SO CLOSE.

Mr Rach describes himself as formerly of Moirai Capital Investments on Linkedin, saying he left in October 2010 and now saya he is now a “WHOLE OF MARKET INDEPENDENT MORTGAGE AND INSURANCE BROKER” at Mortgage Force London

“2010 – Present (6 years)
Whole of market mortgage broker offering competitive mortgage and insurance products.
Dealing with all the major mortgage lenders to achieve a successful outcome with a sympathetic and personal service.”

But maybe you can still be a director without working for the company – a sleeping partner, perhaps?

Other companies the directors run seem to be on a bit of a financial shoestring but Owl understands little (actually, nothing) about high finance and would be happy to stand corrected if misunderstanding the figures.

If anyone from Moirai would like to correct the above with suitable evidence, Owl will be happy to publish it.

Oh dear, and we now find in one of those one in a trillion coincidences that a Mr Sadhu Rach, with the same birth month and birth year trades/has traded on the internet and sells/has sold these:

Hugo Swire – you don’t have to be smart to be a minister, just in a safe seat

Interesting how many old-Etonians were parachuted into safe seats, including our own Hugo Swire. But it isn’t looking quite so safe at the moment. What on EARTH would Swire DO if he was just a constituency MP (or possibly not an MP at all). No wonder he rants at Independents – more of a threat now than ever before!

“Voters elect their members of parliament (MPs) in general elections, but a large majority of MPs have very little to do with the day-to-day governing of the country. It is rather the ministers in government, as selected by the victorious party leaders, who do. Hence there is an obvious link between the general elections and government formation with regard to who selects ministers.

In a recent study with Elad Klein, we show that there is another—albeit a less obvious—connection in terms of who gets selected as ministers; MPs in electorally safe seats are more likely to become ministers.

This is based on an analysis whether the constituency results from the elections to the House of Commons over the period 1992–2015 influenced the likelihood of MPs being selected as ministers in the United Kingdom (UK).

The House of Commons provides the perfect case to assess the electoral connection of ministerial selection due to the single-member districts, large government size, and the relatively decentralised candidate selection process in the UK.

Electoral safety affects the ministerial selection because elections are a constraint over the preferences of MPs and their parties. MPs need to stay in the parliament by being re-elected to be able to pursue other goals, including attaining promotion to government ranks. On the other hand, party leaders need to maximise the number of their MPs in order to stay in the government to achieve their policy ideals.

Electoral constraints differ with the marginality of seats for each MP in Westminster systems. In single-member districts, it is comparatively clear to members and to their leaders how electorally safe their parliamentary seats are.

As the electoral marginality of a seat increases, or in other words as the number of votes separating success from failure to secure a seat decreases, re-election becomes the dominant motivation.

Our results show that there is indeed a positive relationship between MPs electoral safety and their probability of securing a ministerial office. …

… For an MP with 5% electoral safety, which is often considered as marginal, the probability of becoming a minister is one in 10. In contrast, a 35% majority more than doubles this probability for MPs.

Pages 16 and 17 of the Midweek Herald today is a 2-page spread on the Seaton Cycling Festival on 19 June 2016, with some events described as taking place at “Thury-Harcourt/Tesco Plaza: 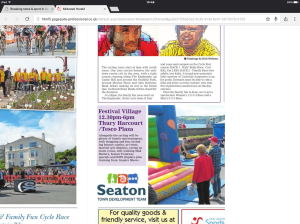 Is this Thury-Harcourt PLACE (Thury-Harcourt being Seaton’s twin town in France) and somewhere outside the Tesco Store (though where the Plaza is is anyone’s guess) or is there an insidious attempt to claim Thury-Harcourt Place as a Tesco advertising site?

So, it now exists …. with senior members of the Conservative majority holding the reins …. the same members that let it get into a position where it needs a regeneration board …. headed by someone who already has two other day jobs.

And they boast of how the have regenerated Seaton and Exmouth …. anyone been to Seaton recently? Where a former mayor has just resigned because he says too much attention is being paid to “Seaton Jurassic” and the Tesco site and not enough attention is being paid to the dying former town centre or other concerns. And where Seaton Heights still sits derelict whilst its owners make fantastic claims about what might happen but show no signs of them ever coming to fruition.

And Exmouth – where “regeneration” has become a dirty word amongst most residents and where EDDC’s chosen partner appears to be floundering with other developments it is involved in – not to mention being unable to file company their accounts on time.