Owl says: Remember when our current CEO went 50/50 to South Somerset Council and no-one noticed – and his work was shared out to other officers? Somerset terminated that contract early and he returned to us full time.

“A council chief who is paid almost as much as the Prime Minister is leaving her post next month. Nicola Bulbeck, Teignbridge Council’s CEO, told a meeting of the full council on Monday that she would be departing from her role on June 9 once she has fulfilled her duties as the Acting Returning Officer for the General Election.

Ms Bulbeck faced criticism last year after it was revealed that she had been awarded an inflation-busting 12 per cent pay rise. Her total remuneration package, including pension contributions and benefits in kind, jumped from £126,097 in 2014/15 to £141,972 in the 2015/16 financial year. Theresa May currently receives £143,462 for leading the country, the Conservative Party and overseeing the hugely complicated Brexit process. …

… Ms Bulbeck will not be directly replaced, but instead, her duties will be distributed between the existing officers and the Deputy Chief Executive, Phil Shears who will become the Head of Paid Service.”

Support for Claire Wright and her campaigning for the NHS 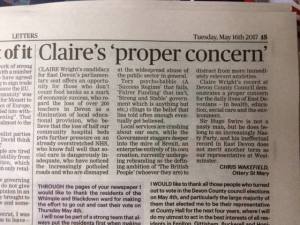 New estate in Bristol could be (should be?) demolished

“Developers UKS Group were given permission to build 13 three-bed houses and one two-bed house off the A38 in Highridge, Bristol. But locals say they have actually built 13 four-beds and one three-bed.”

“A dramatic bid to dissolve Honiton Town Council and give residents the choice to re-elect members has been foiled – prompting the resignation of two more councillors.

Graham Smith launched the motion at an extraordinary meeting of the council on Monday – just one week after Ashley Delasalle spectacularly quit just minutes into her mayoral term.

Addressing the council before the town’s new mayor was voted in, Mr Smith said recent events have added to the “mistrust” and “lack of confidence” the public have in the council.

Mr Smith added: “I fear that no amount of mediation will resolve the differences we have or change the way some councillors conduct themselves with little or no respect for others.

“With this in mind, and to win back the confidence of the town’s people I would like to make a proposal that we vote to do the honourable thing and dissolve this council with every member resigning, call a full town council election and let the people of Honiton decide who they want and trust to form a new council.”

Deputy leader Cllr Henry Brown was forced to adjourn the meeting for five minutes as he discussed the legalities with the deputy clerk, before allowing councillors to discuss the bid.

But he told the council: “You cannot hold this vote because you cannot bar councillors from serving. Resignation is a personal matter and the legality of that says you cannot force councillors to resign.”

Cllr Caroline Kolek said councillors had been put into an “impossible situation” because of Mr Smith’s proposal, adding that we are “damned if we do, damned if we don’t”.

Cllr John Zarcynski, who was voted in as mayor after the debate, said: “For me to resign as a councillor would be showing disrespect and disregard for all those voters who turned out and voted for me. I believe now, we have got the opportunity to rebuild this council and restore unity.”

Following the discussion, Mr Smith and former deputy mayor Jackie Wadsworth resigned and walked out of the meeting.

“Power talks between the Conservative and Independent groups on Cornwall Council have broken down, with claims the Independents want disproportionate power.

This month’s local elections left the authority in limbo and no party in overall control. The Conservatives had the biggest number of councillors and new group leader Phil Seeva was hoping to woo the Independents to join them in a coalition.

But Councillor Seeva has released in a statement saying they have been unable to reach an agreement, and claimed the Indies “want an amount of power and influence on the council that is not proportionate”. He added that the Tories would consider approaching other councillors and look to form their own administration.

But there are a number of possible outcomes, including the Lib Dems – who’ve been waiting in the wings – reuniting with the Independents. Those two groups ran the local authority in a coalition until the 4 May poll.”

What a busy chap the EDDC Monitoring Officer must be!

Criminal investigations in Colyton and Honiton, both needing the intervention of the EDDC Monitoring Officer and both being played out in the local press on a weekly basis.

What is the world coming to?

Probably overdue a meeting of the Standards Committee!

Much reading of all the resignation letters, the ex-Mayor’s view on the issue and a situation even more complicated by the various views expressed: 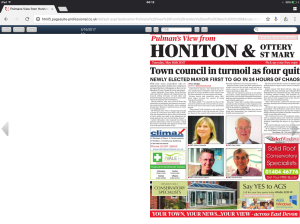