Sunday’s picnic in celebration of The Ham open space took place in bright Sidmouth sunshine, suiting the mood of the organisers, and catching the attention of a steady stream of passers-by.

Information sheets showing the Scoping Study single ‘Proposal’, as displayed at the public consultation, were the subject of much discussion and concern from locals and visitors alike. More signatures were eagerly added to the paper copies of the 3Rs petition, calling for Retain-Refurbish-Reuse, an alternative plan for Port Royal. ..with the numbers already far outweighing the signatures collected online.

It will be handed in to the joint Scoping Study partners, East Devon District Council, and to Sidmouth Town Council which next meets on Monday 4th September, 6.30pm at Woolcombe House, Woolcombe Lane. Public can attend the meeting.

Councillors will not be subjected to “Disclosure and Barring Service” (DBS) checks. This is a service to employers to make safer recruitment decisions and prevent unsuitable people from working with vulnerable groups, including children. It replaces the Criminal Records Bureau (CRB) and Independent Safeguarding Authority (ISA). Councillors will receive safeguarding training instead.
page 77

Manor Pavilion Car Park will become a “Pay and Display” car park
On page 125 a number of exemptions to charges are offered – but Owl recalls that car parking income MUST only be used to improve traffic issues – so quite how the car park income can be used to aid the theatre is confusing.

“Hurricane Harvey has caused huge damage in Texas as 30 inches of rain in less than 48 hours resulted in massive flooding.

The current US President, however, has abolished a number of flood standards in an attempt to get infrastructure projects approved more quickly. The Federal Flood Risk Management Standard is among those to have been rolled back.

In 2015, Mr Obama introduced measures that made it harder to build roads, bridges and other infrastructure in areas that were susceptible to flooding. Plans for such projects would legally have to take into account the impact of climate change and be built to withstand future changes.

While the new regulations had not yet come into effect, they have now been scrapped entirely after Mr Trump decided they were too likely to slow down plans for new infrastructure.

“It’s going to be a very streamlined process, and by the way, if it doesn’t meet environmental safeguards, we’re not going to approve it.”

However, some of those safeguards have now been removed. The order also introduces a two-year time limit for permission to be granted for major infrastructure projects, in which Mr Trump has pledged to invest $1 trillion.

The move was praised by business groups but strongly opposed by environmentalists.”

Neil “feet to the fire” Parish gets cold feet 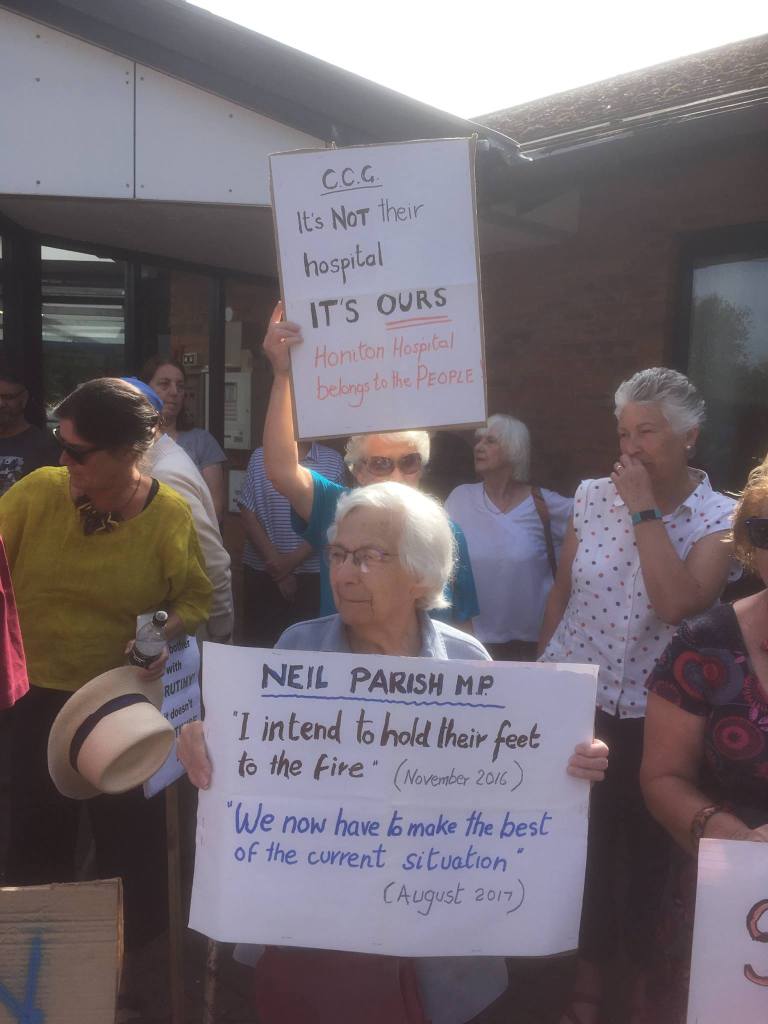 “This morning I attended a vigil outside Honiton Community Hospital. It was called to mark the end of inpatient care in the town. It was a sad day, as it now means that there are no inpatient beds in the hospitals in Seaton, Axminster, Honiton and Ottery St Mary.

I wasn’t sure what to expect … it’s a Bank Holiday and the weather was glorious … so I half expected to be there with just a handful of people.

The event had been organised by Honiton Patients’ Action Group … a well-organised and furious bunch of people.

A group of about 50 turned up, armed to the teeth with placards, happy to vent their feelings to the local press about the parlous state of future community health provision.

Among those present this morning was Cllr Martin Shaw (county councillor for Seaton and Colyton) who spoke about his grave concerns for health provision. He had also addressed Devon County Council’s Scrutiny Committee meeting in July (https://seatonmatters.org/2017/07/26/the-health-scrutiny-committee-which-didnt-scrutinise/).

The decision to close the inpatient beds in Honiton had not been the subject of public consultation, so those present felt that this was sufficient cause for Devon County Council’s Health and Adult Care Scrutiny Committee to refer the decision to close the hospital beds to the Secretary of State, Jeremy Hunt. In turn, he would have had to refer the decision to the Independent Reconfiguration Panel (which describes itself as ‘the independent expert on NHS service change’).

Had that decision been made at their July meeting (https://devoncc.public-i.tv/core/portal/webcast_interactive/293466), those present at the vigil today would probably have still been worried about their future health care, but at least they would have felt that every avenue open to them had been explored.

Instead they were denied this last opportunity by political shenanigans of epic proportion.

I watched the webcast of the July meeting of DCC Health Scrutiny Committee (http://www.devonlive.com/news/devon-news/conduct-committee-members-investigated-devon-312213) and was frankly appalled at the charade being played out before my eyes.

Questions have been raised about how the meeting was conducted and the Standards Committee at DCC meets tomorrow to decide if the complaints are well founded.

Meanwhile, members of East Devon District Council have expressed dismay about the way an almost unanimous vote on a Motion expressing real concern about the conduct of the Clinical Commissioning Group was ignored and have called an Extra Ordinary Meeting of full Council to discuss a Motion of No Confidence in the leader, Cllr Paul Diviani, who sat on Devon County Council’s Health and Adult Care Scrutiny Committee as a representative of the leaders of all the district councils in Devon.

Cllr Diviani effectively voted against referring the decision to close inpatients beds in Honiton to the Secretary of State and later admitted under robust questioning that he had not canvassed the views of the other leaders.

The Extra Ordinary Council meeting will be held on

Wednesday 13 September
at EDDC’s headquarters at the
Knowle, Sidmouth,
starting at
6 p.m.“

“Seaton and District Hospital League of Friends has expressed its dismay at the loss of all its inpatient beds.

Speaking after the closure plans began last week chairman Dr. Mark Welland told the Herald: “We would like to express our deep gratitude to the many dedicated staff who have provided such a high quality of care to patients over the past 29 years, and also our sincere thanks to the numerous volunteers who have worked on the wards to support the patients and nurses.

“The League remains steadfast in its belief that beds are a necessary resource in Seaton, and will continue to explore every avenue that might lead to the reopening of the inpatient service in Seaton Hospital.

“At the same time, we would like to emphasise the ongoing work that will be taking place in Seaton Hospital – whilst it is true that no inpatient beds will be open, there are many more activities carried out at our hospital.

“These include the out-patient clinics which will continue to run, including rheumatology, ear nose and throat, audiology, spinal assessment, and general medicine clinics.

“The ever busy Seaton Hospital physiotherapy department will be continuing at full speed.

“Alongside these the hospital will continue to function as a base for community teams, including the rehabilitation team, speech and language therapy, community nursing, school nurse and health visitor teams, and the complex care team.

“There is now an opportunity for those hospital resources left under utilised by the bed closures to be put to new uses, and the Seaton and District Hospital League of Friends is currently active in establishing which services might be added to the above list to best serve the local community.

“The League continues to support the Seaton Friends Hospiscare at Home service, which will now be more vital than ever, with no opportunity to use hospital beds for end of life care. The Seaton Friends Hospiscare@Home service is entirely funded by the league, and receives no funding from NHS sources, even as the NHS support for end of life care locally is pared back. The League is very thankful to everyone who continues to support us, and to allow our work to continue.”

And no thanks to our two MPs who simply turned up for photo opportunities and mouthed platitudes whilst voting in Parliament for these closures.