Watch out she’s behind you … 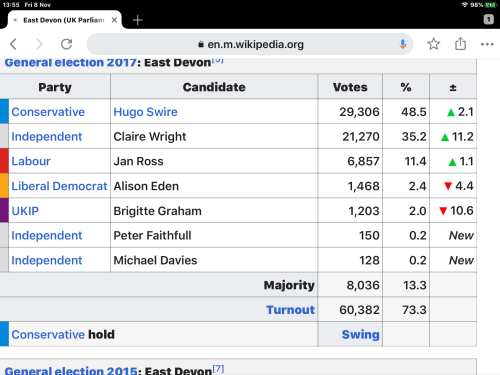 Lib Dems have no chance in winning East Devon. So, it begs the question: are they standing to ensure a Toeygets in again by splitting the non-Tory vote or simply to keep Claire Wright out … because? Or both?

Fat Charlie, the mascot of Little Chef, has been replaced by the Starbucks mermaid, the Olympic breakfast giving way to the mocha macchiato, and the long-loved Annie’s Tea Bar in the layby outside Honiton is now Emma’s Café. Yet as the A303 merges into the A30 on the second stage of my election road trip there is one thing that will surely never change: this Devon land east of Exeter will always be Conservative.

Or will it? Lace-rich Honiton, where the mayor, in a display of “no pain, no gain” philanthropy dating from the reign of King Stephen, throws piping-hot pennies at the people every July, has had Tory MPs since the 1880s, save for a 16-month hiccup in the 1920s. Neil Parish is surely safe with a 20,000 majority.

Head southwest, though, to Ottery St Mary, Sidmouth, Topsham and Budleigh Salterton and something different is happening. An independent anti-austerity councillor has come second twice in general elections in Devon East, cutting the Tory lead in 2017 to 8,000. With Labour 14,500 behind her and the Liberal Democrats losing their deposit last time, Claire Wright is now the opposition.”

One thought on “Watch out she’s behind you …”