What a happy coincidence that, thanks to inadequate parking and poor public transport, people cannot exercise their democratic right to protest at EDDC’s new HQ!

“A reminder that the Planning Inquiry into the appeal that the applicants who are seeking to build a Business Park in Sidford commences on Tuesday 16 July.

The Inquiry has been scheduled to last up to three days and will commence at 10.00 am at the East Devon District Council Offices on the Heathpark industrial estate in Honiton. The full address of the offices is – Blackdown House, Border Road, Heathpark Industrial Estate, Honiton, EX14 1EJ. Click on this link to find where the offices are located (Google Maps).

Because of the extremely limited parking at Blackdown House and the fact that accessing the offices by bus might be a challenge for some people we have decided not to call for a demonstration outside the Inquiry. We know that many people were wanting to show their opposition to the Business Park by demonstrating but unfortunately we feel that logistically doing so on what will be a full working day for the Council wouldn’t work.

We look forward to seeing some of you at the Inquiry.”

The very interesting back story to those painted Sidmouth cliffs … 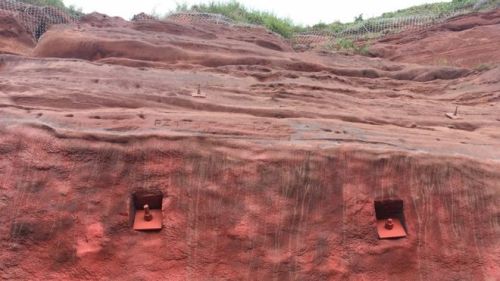 Owl shares some of the elephant’s characteristics – never forgetting being one of them.

Recently a story appeared in the local press about Sidmouth cliffs being painted a strange colour after stabilising work. Oddly, although this was done by the previous Tory-controlled administration, this was not mentioned in the article – leading to the assumption that it had been made by the new no-overall-control council (or Independent Group and Tory coalition – take your pick). Owl found it odd that this old information had only now been reported to the press.

When Owl saw the name of the geologist who seemed to have broken the story, Dr Alistair Bruce, the name rang a bell. Trawling through its vast archive, it turned up the information that Dr Bruce is none other than the defeated Tory candidate for Yarty ward in the local election last month.

Dr Bruce was chosen instead of long-serving former Leader Paul Diviani – who vented his wrath in a letter to former constituents calling his removal “a [Tory Party] vendetta:

Diviani was then relegated to finding another vacancy and chose Broadclyst – which he lost. The successful candidate for Yarty was East Devon Alliance Councillor Paul Hayward.

Owl is happy to be putting the record somewhat straighter with this information that has always in the public domain, though the last word has to go to The Daily Telegraph, with its suggestion for a new posh paint manufacturer Farrow and Ball colour – Sidmouth Cliffs Red: 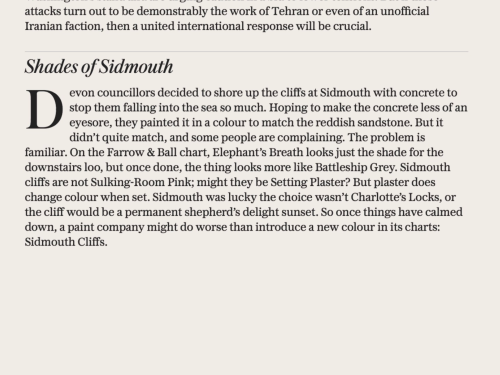 In light of the recent call for recommendations for the welcome, annual Acland Awards (for those conserving/enhancing our local Area of Outstanding Natural Beauty or AONB) – can I make a recommendation?

Someone please put forward the Say No to the Sidford Fields Industrial Park Campaign since they are doing more than anyone I know to protect East Devon AONB (I put them forward last year).

Their earnest activities to save this crucial part of Sidvale from unnecessary ruination is, in my opinion, exactly what Brigadier Acland had in mind during the process of setting up our precious and it seems, eternally threatened AONB. And they need all the encouragement they can get.

[Mr Venner – Conservative candidate – appears to say in a comment on a previous post that he was not invited. He might want to take this up with his agent or constituency office as there may be some crossed wires there somewhere]

To quote a commentator:

“I thought it was a good convivial event which achieved its purpose for voters who attended. It was good to see the candidates being engaged and convivial with each other, and all in all I think the event was worthwhile, contributing to an awareness of the upcoming elections and the importance of voting.”

The organisers of the event were at pains to contact all the candidates.

Finally, it was noted that several members of the public popped into the Hall to ‘have a look’ but did not want to venture in – feeling either that ‘there was no point in voting’ or that ‘all politicians are corrupt/useless/a waste of time’…

Let’s hope that voters do nevertheless turn up tomorrow on voting day.”

Be sceptical about pre-election rumours!

Ask yourself – who would start such “good news” rumours just before local elections!

“A pair of retail giants has quashed rumours of setting up shop in Sidmouth.

Both Marks and Spencers and Superdrug have ruled out any plans to set up a food hall or beauty store at this time.

With a number of buildings available for new businesses in the town, there has been talk that both companies may have had their eyes on coming to Sidmouth. …”

NOTE: a planning inquiry is much more formal than a hearing and usually involves lawywers, examination of evidence and cross-examination:

“We have now been advised by the District Council that the Planning Inspector has determined that instead of holding a Hearing into the planning appeal as we previously had been told, the Inspector has now decided to hold an Inquiry which could last up to three days. The first of these days is due to start on 16 July. We are assuming that the Inspector will therefore have penciled in the Inquiry to be held on

The Inquiry will be held in public and will be held locally. If you have any interest in attending then put these dates in your diary now!

In our last Update we asked you to consider submitting additional evidence to the Planning Inspector and we know that a number have done so, and thank you to those who have.

We again would encourage as many of you as possible who wish to, to submit comments even at this late stage. As the District Council refused planning permission solely on grounds related to highways matters you should only submit highways related comments. In doing so you might want to address matters that include –

Evidence or statements regarding the effect of noise, vibration, damage and pollution on your properties (and vehicles) due to HGV or other traffic

Effect on the health of residents attributable to air quality

Road safety issues – lack of pavements or narrow pavements, plus no lollipop lady, crossing nor traffic lights to help you cross safely with your children

Evidence of vehicles mounting and/or diving on pavements

Where possible your comments should be supported by photographic evidence.

We believe that it is important for as many photographs and/or videos are submitted to the Planning Inspector showing images of traffic congestion/difficulties along the A375 at any point between Sidford and Cotford in Sidbury.

Attached, once again, is a brief guide as to how to present any submission that you make.

GUIDE TO PRESENTATION OF SUBMISSIONS:

Guidance on submitting additional evidence to the Planning Inspector

All comments and evidence must –

• be received by the Planning Inspector by no later than 22 April 2019. Anything received after this date will not be considered by the Inspector.

• quote the address of the appeal site i.e. the Business Park. The address to be quoted is – Land East of Two Bridges, Two Bridges Road, Sidford.

• your name and address

• state “I am against the appeal proposals” and explain whether it is for the same reasons as given by the District Council or, if not, explain your own reasons

“1. The proposed development, by virtue of the proposed B8 uses, would result in an increase of HGV traffic on the surrounding road network, both in the vicinity of the site and through Sidbury which both suffer from inadequate road widths and a lack of footways. As such increased HGV movements within this area will result in conflicts between vehicles, and between vehicles, cyclists and pedestrians, to the detriment of highway safety. The proposed development is therefore considered contrary to paragraph 32 of the National Planning Policy Framework and Strategies 26 (Development at Sidmouth), and Policies TC7 (Adequacy of Road Network and Site Access) of the adopted East Devon Local Plan 2013 – 2031.”

The Planning Inspector asks that any additional submissions are –

• use A4 paper wherever possible

• number the pages of the documents

• make sure photocopied and scanned documents are clear and legible

• use black and white for documents unless colour is essential

• put any photographs (both originals and photocopies should be in colour),
maps, plans, etc, in a separate appendix and cross reference them within the main body of the document

• print documents on both sides of a page. You should use paper of good enough quality that something printed on one side of the page does not show through to the other side

• do not send original documents

You should send your written submission and/or photographs/videos –
By post to: