Owl gets its talons tapped

Owl has received a comment which says it must immediately take down a comment that local tory parties, freemasons and developers get more listened to than town councils in matters of planning. The commentator says it casts aspersions on an upright and moral group of charitable people – specifically the freemasons (but does not mention the others).

Owl, of course, implied no such thing. Of course ALL the groups mentioned are upright and moral – including town councils. It is just that the town councils, which many think have greatest clout, have, in many cases in practice, less clout than practically every other group.

So, in the interests of fairness, Owl adds more upright and moral groups whose remarks are more likely to carry weight than those of a town council. They include, but not exclusively:

Hope that clears up the misunderstanding.

Seaton used to have 6 direct buses a day to Exeter, then it went down to 4 and there are now only 2 and no e on Sundays. The X52 service will end on 21 January 2018. The inly alternative thereafter will be the 9A via Sidmouth, necessitating a change in Exeter to get to the RDE.

Seaton, with its closed community hospital, new Jurassic Visitor Centre and Premier Inn truly will be the end of the Exeter/East Devon health and transport Universe!!!

If you live in Seaton, perhaps consider moving to Cranbrook which has better road and rail transport (though it does have other major drawbacks!).

Monday-Friday:
People with hospital appointments, jobs or education in Exeter will only be able to catch buses at 6.33, 7.05 or 7.50 am. First buses for bus pass holders to Exeter will be 10 am arriving 11.30. For those returning from Exeter, the last bus will be 19.05 arriving Seaton 20.14. 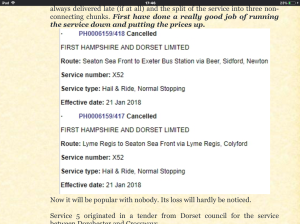 “Wow! A bonus worth more than working since the building of Stonehenge for an average Briton…”

Most districts are more likely to take the views of their local Tory association and/or Freemasons Lodges and/or developers than any of its town councils! Well done Buckfastleigh for recognising and admitting this.

The Planning, Environment & Transport Committee, which evolved from the Planning Committee that was in place until 2015, has up till now examined and responded on every local planning application made to the Dartmoor National Park Authority (DNPA), Teignbridge District Council (TDC) or Devon County Council (DCC).

At the meeting we observed that as a Town Council we have in fact had no powers in terms of planning since 1974, when TDC took over most of the powers of the then Buckfastleigh Urban District Council, but that many local people still felt that we had some control over planning decisions. This has led to both misplaced hope that bringing a case to the Planning Committee will make a difference to their case and consequent blame when planning decisions go ahead regardless of their concerns.

It has been made quite clear in recent years that the carefully considered and well-informed responses to planning applications to DNPA, TDC and DCC have been ignored by their planning authorities in reaching decisions. In fact the Town Council has recently a formal complaint with DCC about it’s inability to enforce planning legislation and it’s misconduct in issuing planning notices in the case of Whitecleave Quarry.

Since the start of this council in May 2015, none of the responses submitted by the council in response to any major planning proposal in the parish has had an appreciable effect on the outcome. This includes the Town Council’s responses to the DNPA for piecemeal development of the Devonia site at the heart of the town which has now twice been given permission to demolish and build afresh. This despite the Buckfastleigh Neighbourhood Plan, initiated by the Town Council, which, after prolonged and detailed consultation with local residents, has recommended developing a Masterplan for the site which takes into account flood mitigation and coherent future mixed-use and also after assurances that DNPA would work ‘closely’ with us in future and that ‘mistakes’ had been made in the past.

We are quite sure too that our carefully expressed concerns about the upcoming plans for 80 plus new homes at Barn Park and Holne Rd (despite proven lack of local housing need), resulting in increased traffic/parking issues, flood risk and pressure on local amenities, will also be ignored by the DNP, who, in line with the the other authorities, seem always by default to find in favour of commercial developers whilst disregarding the needs of local residents.

We feel that by maintaining a ‘Planning’ committee, which is clearly impotent, we are misleading the public and misdirecting any concerns they have. We believe it would likely have more impact if all the individual councillors and members of the public made their own representations to planning authorities (although evidence is limited that this has any effect either!) and we don’t want to be duped into inadvertently acting as fodder for those authorities going through the motions of carrying out statutory consultative procedures, unless our opinion is actually given some weight.

We will continue to flag up any planning proposals that are likely to have a significant impact on the parish and fight for the interests of our constituents, but we will no longer formally meet as a planning committee to formulate our responses – these will come from full council. The current Planning, Environment & Transport committee will be dissolved and it’s members will meet to discuss any future remit.

Axminster and Sidmouth voted in worst 9 town to live in by locals!

“A website which lists the worst places to live in the UK lists nine places as the worst in Devon – and the reviews on the website iLiveHere.uk are all written by local people. It includes Axminster and Sidmouth.

7 – Axminster – Blink and you’ll miss it

Axminster is a small town where everybody knows everybody, in fact most people know about your business before even you do.

8 – Sidmouth, it is paradise… for the retired or elderly

Visit the Donkey Sanctuary, it’s the richest charity in the UK which takes the p*** a bit because donkeys are no longer needed for anything.”

“The chair of Persimmon has resigned over his role in orchestrating a £128m bonus for the housebuilder’s chief executive, Jeff Fairburn, that will begin paying out on New Year’s Eve.

Nicholas Wrigley, the company’s chair and a former banker, said he regretted not capping the bonus scheme and was leaving “in recognition of this omission”.

The Guardian understands Wrigley had put pressure on Fairburn to donate some of his bonus to charity, although Persimmon declined to comment.

The bonus scheme – believed to be the most generous ever in the UK – is due to start paying out more than £800m to 150 senior staff on 31 December. The payouts are linked to the company’s stock market performance, which has been significantly boosted by the government’s help to buy scheme.

Persimmon’s share price has more than doubled since George Osborne introduced help to buy in 2013. About half of Persimmon homes sold last year were to help-to-buy recipients, meaning government money helped finance the sales.

The bonuses have been widely criticised by politicians, charities and corporate governance experts contacted by the Guardian this week. One expert described the bonuses as “corporate looting”, while another said directors had their “hands in an open cookie jar”.

Vince Cable, the leader of the Liberal Democrats, said the “scale of this bonus is obscene” and built on a “government subsidy”.

“It is reminiscent of the worst excesses of corporate greed that helped to create the financial crisis, when short-termism was heavily incentivised and long-term planning ignored,” he said.

“This is also a perverse situation where a corporate fortune has been built on what is essentially a government subsidy in help to buy. This situation shows just why help to buy is so flawed: it fuels demand rather than supply, putting house prices even further out of reach of young people, while adding zeros to the bank balances of housebuilding executives.”

Homeowners trapped by ‘fleecehold’ – the new cash cow for developers
Fairburn is due to collect the first £50m worth of bonus shares on 31 December. The scheme, which is based on the level of dividend returned to shareholders, was meant to take 10 years to pay out, but the company has accelerated dividend payments.

This means Fairburn, other executives and more than 100 middle managers are likely to collect all of the £800m worth of shares by July 2018, far ahead of the 2021 schedule.

The top three Persimmon bosses are due to collect more than £230m from the scheme, which was worth 9% of the entire company when it was created.

John Hunter, the chair of the UK Shareholder Association, which represents small investors, said the bonus scheme was “completely ridiculous” and was based solely on the dividend payments.

“Any bloody fool can pay dividends – it’s just paying them their own money. The scheme is doing the opposite of what it is meant to do – incentive performance and retention,” Hunter said.

“How does this incentive people when they’re all sitting on fortunes? If you’re a manager and you’re getting millions you’d retire on the spot.”

Hunter said Persimmon defends the scheme, which was approved by 85% of investors in 2012, as a reflection of the company’s strong performance and the billions of pounds it has returned to investors through dividends.

“It has done brilliantly well – with our money,” he said. “Help to buy has been almost a license to print money – our money. These bonuses are being subsided by us. All building companies have made a lot of money from help to buy, a government subsidy. We, the voters, have subsidised these payments to directors.”

He added: “I don’t blame directors for putting their hands in an open cookie jar – they are only human. The question here is how this scheme ever got approved.”

“Nicholas and Jonathan recognise that the 2012 LTIP [long-term incentive plan] could have included a cap,” the company said in a statement. “In recognition of this omission, they have therefore tendered their resignations.”

Davie resigned with immediate effect. Wrigley will stay on until his successor has been appointed. …”

What an excellent idea! Something for other towns to copy.

Context: This event is the start of a community conversation with key stakeholder organisations around the future health and wellbeing of residents in response to the new landscape affecting Honiton and its environs as a result of NHS and Government policies advocating placed-based health provision and cross-sector collaborative working.

The aim: To discuss what we know, where there are gaps/challenges and how, as a community we will address these to ensure collaborative approaches to co-design and co-produce local health services/activities that meet the needs of all the people in our communities.